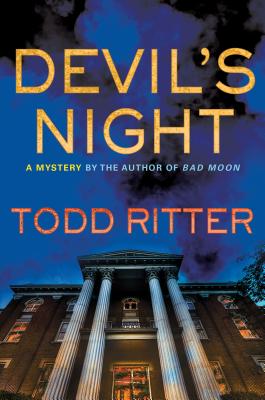 Two things Perry Hollow Police Chief Kat Campbell never thought she would do again: Enter a burning building, and lay eyes on Henry Goll, the man who was trapped inside with her the last time she was in one. So Kat's on high alert when, barely a year after the dust settled around the Grim Reaper killings, both happen on the same day.

She's jolted awake at 1a.m. by a desperate phone call telling her Perry Hollow's one and only museum home to all the town's historical artifacts has been set on fire. Arriving at the scene, Kat catches just a glimpse of Henry's face among the crowd before she's rushed into the charred building, only to find the museum curator dead bludgeoned, not burned. Kat has lived through some tense moments and seen some gruesome crimes, but the next twenty-four hours will be the most dangerous of her life as she and Henry seek out a killer and the motivation behind these terrifying crimes.

Todd Ritter returns to the beloved town of Perry Hollow, Pennsylvania with "Devil's Night," his most poignant, cleverly plotted novel yet.

“Kat's third shakes up her love life and offers a twisty mystery with enough suspects to keep you guessing to the bitter end.”—Kirkus Reviews

"A series well worth recommending."—Booklist

"Draws you in irresistibly and doesn’t spit you out till the very end, your head spinning with surprising revelations." —Kirkus Reviews (starred)

“The ending sets things right in a storm of violence and revelations. An adroit puzzler with a genuinely surprising ending.” —Booklist

“The sophomore entry in the Kat Campbell series is steeped in deception and lies. Ritter sets the scene using the moon landings as the basis for a succession of crimes and keeps the reader guessing about the final outcome. His fully developed characters complement the flawless pacing.” —RT Book Reviews (4.5 stars)

TODD RITTER, author of Death Notice and Bad Moon, is a career journalist and currently works at The Star-Ledger. He lives in Belle Mead, New Jersey. Devil's Night is his third novel.
Loading...
or
Not Currently Available for Direct Purchase