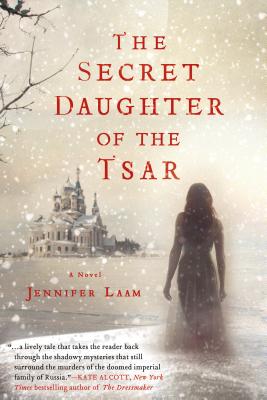 The Secret Daughter of the Tsar

A Novel of The Romanovs

In her riveting debut novel, The Secret Daughter of the Tsar, Jennifer Laam seamlessly braids together the stories of three women: Veronica, Lena, and Charlotte.

Veronica is an aspiring historian living in present-day Los Angeles when she meets a mysterious man who may be heir to the Russian throne. As she sets about investigating the legitimacy of his claim through a winding path of romance and deception, the ghosts of her own past begin to haunt her.

Lena, a servant in the imperial Russian court of 1902, is approached by the desperate Empress Alexandra. After conceiving four daughters, the Empress is determined to sire a son and believes Lena can help her. Once elevated to the Romanov's treacherous inner circle, Lena finds herself under the watchful eye of the meddling Dowager Empress Marie.

Charlotte, a former ballerina living in World War II occupied Paris, receives a surprise visit from a German officer. Determined to protect her son from the Nazis, Charlotte escapes the city, but not before learning that the officer's interest in her stems from his longstanding obsession with the fate of the Russian monarchy.

As Veronica's passion intensifies, and her search for the true heir to the throne takes a dangerous turn, the reader learns just how these three vastly different women are connected. The Secret Daughter of the Tsar is thrilling from its first intense moments until its final, unexpected conclusion.


Praise For The Secret Daughter of the Tsar: A Novel of The Romanovs…

“Laam has not only created a captivating tale, but has woven a delicate and resonant fabric from the timeless threads of love and loyalty, betrayal and redemption.” —Pam Jenoff, international bestselling author of The Ambassador's Daughter

“Well-researched, clever, and compelling...Jennifer Laam is an emerging novelist to watch.” —Roberta Rich, author of the international bestseller The Midwife of Venice

Jennifer Laam earned her master’s degree in History from Oakland University in Michigan and her bachelor’s degree from the University of the Pacific in Stockton, CA. She has lived in Los Angeles and the suburbs of Detroit, traveled in Russia and Europe, and worked in education and non-profit development. She currently resides in Northern California. The Secret Daughter of the Tsar is her first novel.
Loading...
or support indie stores by buying on