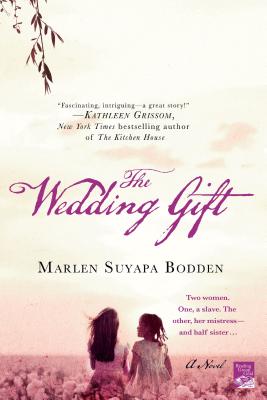 In 1852, when prestigious Alabama plantation owner Cornelius Allen gives his daughter Clarissa's hand in marriage, she takes with her a gift: Sarah—her slave and her half-sister. Raised by an educated mother, Clarissa is not the proper Southern belle she appears to be, with ambitions of loving whom she chooses. Sarah equally hides behind the façade of being a docile house slave as she plots to escape. Both women bring these tumultuous secrets and desires with them to their new home, igniting events that spiral into a tale beyond what you ever imagined possible. Told through the alternating viewpoints of Sarah and Theodora Allen, Cornelius' wife, Marlen Suyapa Bodden's The Wedding Gift is an intimate portrait of slavery and the 19th Century South that will leave readers breathless.

Praise For The Wedding Gift: A Novel…

“Passionate...a good choice for readers who like a fast-paced historical story.” —Library Journal

“The strength of the novel is its slave narrative tone and its ability to demonstrate the pain of being owned by another human being. Many have heard of slavery; few know this story. It's too important to overlook.” —Daniel Black, author of Twelve Gates to the City

MARLEN SUYAPA BODDEN is a lawyer at The Legal Aid Society in New York City, the nation’s oldest and largest law firm for the poor. She drew on her knowledge of modern and historical slavery, human trafficking, and human rights abuses to write The Wedding Gift, her first novel. Marlen is a graduate of New York University School of Law and Tufts University. In 2012, the University of Rhode Island awarded Marlen an honorary Doctor of Laws degree.
Loading...
or
Not Currently Available for Direct Purchase