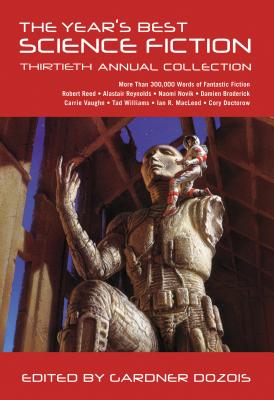 In the new millennium, what secrets lay beyond the far reaches of the universe? What mysteries belie the truths we once held to be self evident? The world of science fiction has long been a porthole into the realities of tomorrow, blurring the line between life and art. Now, in The Year's Best Science Fiction: Thirtieth Annual Collection the very best SF authors explore ideas of a new world through their short stories. This venerable collection brings together award winning authors and masters of the field such as Robert Reed, Alastair Reynolds, Damien Broderick, Elizabeth Bear, Paul McAuley and John Barnes. And with an extensive recommended reading guide and a summation of the year in science fiction, this annual compilation has become the definitive must-read anthology for all science fiction fans and readers interested in breaking into the genre.
The multiple Locus Award-winning annual compilation of the year's best science fiction stories

“From Indrapramit Das's story of a frozen world eternally locked into a Nightside and a Dayside, to Robert Reed's novella about humans marooned on a planet where they are seen by the natives as monsters . . . lovers of science fiction of all kinds will enjoy this annual overview.” —Library Journal

“There really is no better collection out there . . . Here's hoping that Dozois can keep it up for another thirty years.” —SFRevu

“This smorgasbord of thought-provoking fiction ensures that any reader will likely find something appealing.” —Publishers Weekly

“Gardner Dozois's long-running 'best of' series is rightly a favorite...Mr. Dozois picks fiction that deserves to be better known to a wide audience.” —The Wall Street Journal