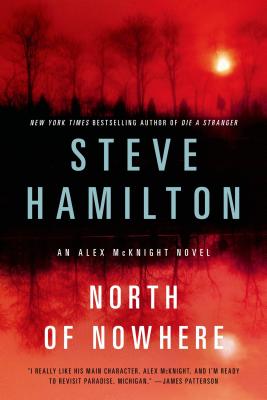 "I really like his main character, Alex McKnight, and I'm ready to revisit Paradise, Michigan."—James Patterson


Steve Hamilton's novels have won the mystery world's most prestigious awards. Now, in North of Nowhere, he returns to Michigan's Upper Peninsula, where former Detroit cop Alex McKnight has learned that wherever money goes, envy isn't far behind.

After a game of cards turns into a professional heist, Alex McKnight finds himself lying facedown on the floor with a gun to the back of his head. When the dust settles, McKnight is one of the police chief's lead suspects. Worse, one of the other card players has the same idea, and he has no qualms about exercising some vigilante justice of his own. Now, Alex knows he is the only one who can uncover the truth. But he's about to discover how dark this conspiracy truly is—or how close to guilt he actually stands. . . .


“I'm often asked to recommend a detective series readers might have missed. This is it.” —Harlan Coben

“[Hamilton’s] . . . tensile prose . . . reflects the dramatic, often violent contradictions of people who live on the edge of the world.” —The New York Times Book Review

“Hamilton keeps the action fast and furious and manages to keep the reader off balance almost as much as his hero. . . . While Alex McKnight may hate the idea, mysteries this good may make him extremely popular.” —Publishers Weekly (starred review)