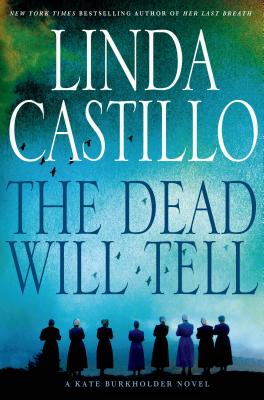 The Dead Will Tell (Hardcover)

Everyone in Painters Mill knows the abandoned Hochstetler farm is haunted. But only a handful of the residents remember the terrible secrets lost in the muted/hushed whispers of time—and now death is stalking them, seemingly from the grave.

On a late-night shift, Chief of Police Kate Burkholder is called to the scene of an apparent suicide—an old man found hanging from the rafters in his dilapidated barn. But evidence quickly points to murder and Kate finds herself chasing a singularly difficult and elusive trail of evidence that somehow points back to the tragedy of that long ago incident. Meanwhile, Kate has moved in with state agent John Tomasetti and for the first time in so long, they're both happy; a bliss quickly shattered when one of the men responsible for the murders of Tomasetti's family four years ago is found not guilty, and walks away a free man. Will Tomasetti be pulled back to his own haunted past?

When a second man is found dead—also seemingly by his own hand—Kate discovers a link in the case that sends the investigation in a direction no one could imagine and revealing the horrifying truth of what really happened that terrible night thirty-five years ago, when an Amish father and his four children perished—and his young wife disappeared without a trace.
And, as Kate knows—the past never truly dies . . . in The Dead Will Tell by Linda Castillo

Linda Castillo is the New York Times bestselling author of the Kate Burkholder novels, including Sworn to Silence which was recently was adapted into a Lifetime Original Movie titled An Amish Murder starring Neve Campbell as Kate Burkholder. Castillo is the recipient of numerous industry awards including a nomination by the International Thriller Writers for Best Hardcover, the Daphne du Maurier Award of Excellence, and a nomination for the RITA. In addition to writing, Castillo’s other passion is horses. She lives in Texas with her husband and is currently at work on her next novel.

Praise For The Dead Will Tell: A Kate Burkholder Novel…

“Castillo weaves a taut mystery in her sixth series title that will keep suspense fans glued to their books and ereaders.” —Library Journal (starred)

“A stunner. . . . Castillo once again displays her mastery of edge-of-your seat suspense.” —Publishers Weekly (starred review) on Her Last Breath

“The fifth in the series continues to provide details on the Amish way of life along with a fast-paced mystery that will leave readers stunned.” —Kirkus Reviews (starred) on Her Last Breath