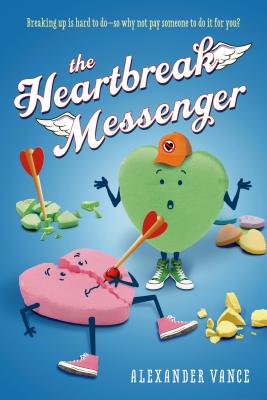 Breaking up is hard to do—so why not pay someone to do it for you?

Twelve-year-old Quentin never asked to be the Heartbreak Messenger. It just kind of happened, and he can't let a golden opportunity pass him by. The valuable communication service he offers is simple: He delivers breakup messages. For a small fee, he will deliver that message to your soon-to-be ex. If you order the deluxe package, he'll even throw in some flowers and a box of chocolates. You know . . . to soften the blow.

At first, Quentin's entrepreneurial brainchild is surprisingly successful, which is great, because he suspects his mom, who works as a car mechanic, is worried about money. But as he interacts with clients, message recipients, and his best friend, Abigail, it doesn't take long for him to wonder if his own heart will remain intact. In The Heartbreak Messenger by Alexander Vance, Quentin discovers that the game of love and the emotions that go with it are as complicated as they come—even for an almost-innocent bystander.


Praise For The Heartbreak Messenger…

“When his best friend's brother wants to break up with his girlfriend but doesn't know how, Quentin agrees to do it for him for $20. He never expects it to turn into a business, but after being successful and taking the ex's advice to soften the blow with flowers and chocolate, he becomes the heartbreak messenger. . . This clever read will find an audience with both boys and girls.” —School Library Journal, starred review

“The laughs are plentiful in Vance's debut. . . . Overall it's an entertaining and funny read with a clever conceit.” —Publishers Weekly

“Breaking up is hard to do, but not if you have the Heartbreak Messenger do it for you. . . .With strong supporting characters and an appealing lead, this funny, feel-good tale is perfect for those beginning to think about dating.” —Booklist

Alexander Vance works as a film and video editor. The Heartbreak Messenger is his fiction debut. He lives in Upstate New York with his family.
Loading...
or
Not Currently Available for Direct Purchase