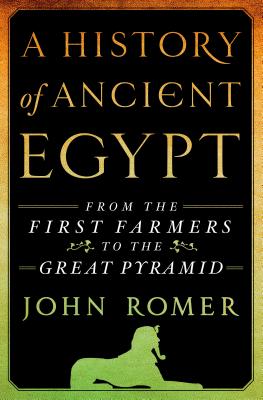 A History of Ancient Egypt

From the First Farmers to the Great Pyramid

The ancient world comes to life in the first volume in a two book series on the history of Egypt, spanning the first farmers to the construction of the pyramids. Famed archaeologist John Romer draws on a lifetime of research to tell one history's greatest stories; how, over more than a thousand years, a society of farmers created a rich, vivid world where one of the most astounding of all human-made landmarks, the Great Pyramid, was built. Immersing the reader in the Egypt of the past, Romer examines and challenges the long-held theories about what archaeological finds mean and what stories they tell about how the Egyptians lived. More than just an account of one of the most fascinating periods of history, this engrossing book asks readers to take a step back and question what they've learned about Egypt in the past. Fans of Stacy Schiff's Cleopatra and history buffs will be captivated by this re-telling of Egyptian history, written by one of the top Egyptologists in the world.

Praise For A History of Ancient Egypt: From the First Farmers to the Great Pyramid…

“Scholarly, passionate, and exquisitely written . . . it is remarkable how this book gives us almost nothing of the ancient Egypt we think we know . . . [Romer writes] with all the care and exactitude of a pharanoic engineer with a plumb line . . . a stunning, clear-sighted history of ancient Egypt.” —The Sunday Times (UK)

“After a long wait, we have an up-to-date, stimulating account of the birth of what may turn out to be the world's oldest civilization.” —Nature (UK)

“His physical descriptions are superb . . . A book to be read and thought about.” —Financial Times (UK)

JOHN ROMER has worked in Egypt since 1966 on archaeological digs in many key sites, including the Valley of the King and Karnak. He led the Brooklyn Museum expedition to excavate the tomb of Ramasses XI. He wrote and presented a number of television series, including The Seven Wonders of the World, Romer's Egypt, Ancient Lives, and Testament. He lives in Tuscany, Italy.
Loading...
or support indie stores by buying on