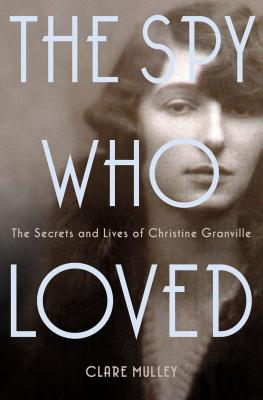 The Spy Who Loved (Hardcover)

The Secrets and Lives of Christine Granville

In June 1952, a woman was murdered by an obsessed colleague in a hotel in the South Kensington district of London. Her name was Christine Granville. That she died young was perhaps unsurprising; that she had survived the Second World War was remarkable.

The daughter of a feckless Polish aristocrat and his wealthy Jewish wife, Granville would become one of Britain's most daring and highly decorated special agents. Having fled to Britain on the outbreak of war, she was recruited by the intelligence services and took on mission after mission. She skied over the hazardous High Tatras into occupied Poland, served in Egypt and North Africa, and was later parachuted behind enemy lines into France, where an agent's life expectancy was only six weeks. Her courage, quick wit, and determination won her release from arrest more than once, and saved the lives of several fellow officers—including one of her many lovers—just hours before their execution by the Gestapo. More importantly, the intelligence she gathered in her espionage was a significant contribution to the Allied war effort, and she was awarded the George Medal, the OBE, and the Croix de Guerre.

Granville exercised a mesmeric power on those who knew her. In The Spy Who Loved, acclaimed biographer Clare Mulley tells the extraordinary history of this charismatic, difficult, fearless, and altogether extraordinary woman.

CLARE MULLEY is the author of The Woman Who Saved the Children: A Biography of Eglantyne Jebb, which won the Daily Mail Biographers’ Club Prize.  She is a contributor to The Arvon Book of Life Writing and is a seasoned public speaker.  She has written for History Today, The Express, and The Church Times.

Praise For The Spy Who Loved: The Secrets and Lives of Christine Granville…

“This summer's most spellbinding saga of espionage and adventure.” —Vogue.com

“Oustanding.... While a few books about Christine have emerged in the intervening decades, only now, with the publication of Clare Mulley's scrupulously researched and expertly rendered biography, do we have a multi-dimensional, uncensored, impartial portrait of the legendary spy--said to be Churchill's favorite--whose 44-year existence was filled with more eye-popping adventures than we'd find plausible in any novel or movie.” —The Daily Beast

“Well-written and thoroughly researched… One British functionary described [Granville's] dispatches from the field as 'good reading.' The same can be said of Ms. Mulley's biography of this extraordinary woman.” —Wall Street Journal

“Better than any James Bond novel… The most frank and comprehensive tribute yet to Christine… A thrilling account.” —Salon

“Excellent…. A romping adventure of international espionage, grand plots and sex, with the fate of the world hanging in the balance…. [a] well-researched portrayal, a fascinating and riveting account of an exceptional spy's exceptional life…. An exemplary feminist biography, which, without ever slipping into didacticism, takes its subject, her desires and her choices seriously.” —Haaretz

“Mulley gives a remarkable, charismatic woman her due in this tantalizing biography.” —Publishers Weekly (starred review)

“Not only was Christine Granville Britain's first woman agent in World War II but carried out some of the most daring missions ever conceived. Her biographer Clare Mulley has provided a vivid account of her activities yet maintains a balanced assessment of the results. Careful research has created sustained tension, vitality and immediacy which are truly page-turning.” —Gordon Thomas, bestselling author of The Pope's Jews and Gideon's Spies

“I enjoyed and admired The Spy Who Loved… A really gripping account of the remarkable Christine Granville.” —Simon Mawer, bestselling author of Trapeze and The Glass Room

“Impressively researched, and absolutely fascinating. Christine Granville is one of those women you can't help wishing you'd met in real life.” —Jojo Moyes, award-winning author of Me Before You

“Compulsively readable… Clare Mulley has done a dogged piece of detective work piecing together Christine's ultimately tragic life… She has written a thrilling book, and paid overdue homage to a difficult woman who seized life with both hands” —The Sunday Telegraph (UK)

“Engrossing biography details the high-voltage life of one of Britain's most remarkable female spies... Fascinating” —Mail on Sunday (UK)

“The brutal end of Christine Granville's short life – told with terrific élan and mesmerising detail by Clare Mulley – came when the last of a multitude of spellbound lovers stabbed her through the heart in the bedroom of a Kensington hotel…. [a] splendid book… [a] captivating female version of the Scarlet Pimpernel… Christine Granville remains as alive, well and compelling as ever: a figure of radiant magnetism, ruthless determination and a courage that – as several of them attested – could make a strong man shudder.” —The Telegraph (UK) Five Stars (out of five)

“Drawing on an unprecedented range of sources, Clare Mulley's The Spy Who Loved is a fine account of Christine Granville's extraordinary war, told with skill and care... Mulley succeeds in making her human... What is quite clear from this inspiring biography is that Granville was as charismatic as she was courageous.” —Roderick Bailey, Literary Review

“This is the first book about [Granville] for more than 30 years - and it painstakingly disentangles her complex story and equally complex character. Clare Mulley has made a fine and soberly thrilling addition to the literature of the undercover war - the sort that does not exaggerate or mythologise… Christine did not want a normal life: all she cared for was freedom, independence and adventure - the more dangerous, the better. This book, massively researched and excitingly told, brings an extraordinary heroine back to life.” —Daily Mail (UK)

“This is a meticulously researched but also highly readable account of [Granville's] heroic but unfulfilled and deeply tragic life, without any attempt at gloss. It is one of the most exciting books I've read this year.” —Alistair Horne, The Spectator (UK)

“Assiduously researched, passionately written and highly atmospheric biography… Not just the story of a uniquely brave and complicated patriot, but also a scholarly and tautly written account of secret operations in occupied Europe.” —The Economist