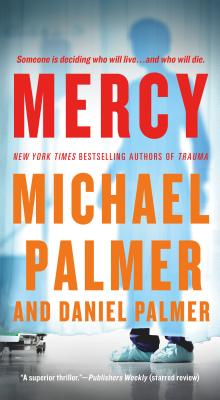 Dr. Julie Devereux is an outspoken advocate for the right to die—until a motorcycle accident leaves her fiancé, Sam Talbot, a quadriplegic. Sam begs to end his life, but Julie sees hope in a life together. Then, just as Sam seems to be coming around to her point of view, he has an unexpected heart attack. An autopsy reveals that Sam died of an unusual heart defect, one seen only in those under extreme stress—in fact, it appears that Sam had literally been scared to death.

As Julie investigates similar cases, she finds a frightening pattern…and finds herself the target of disturbing threats. The more cases Julie discovers, the more the threats escalate, until she is accused of a mercy killing of her own. Now, to clear her name and save her career, she must track down whoever is behind these mysterious deaths...but time is running out, as someone has decided that killing Julie is the only way to stop her.

Michael Palmer (1942-2013) wrote internationally bestselling novels of medical suspense, including The First Patient, The Second Opinion, The Last Surgeon, A Heartbeat Away, Oath of Office and Political Suicide. His book Extreme Measures was adapted into a movie starring Hugh Grant and Gene Hackman. His books have been translated into thirty-five languages. Palmer earned his bachelor's degree at Wesleyan University, and he attended medical school at Case Western Reserve University. He trained in internal medicine at Boston City and Massachusetts General Hospitals. He spent twenty years as a full-time practitioner of internal and emergency medicine. In addition to his writing, Palmer was an associate director of the Massachusetts Medical Society Physician Health Services, devoted to helping physicians troubled by mental illness, physical illness, behavioral issues, and chemical dependency. He lived in eastern Massachusetts.
or
Not Currently Available for Direct Purchase
Copyright © 2020 American Booksellers Association