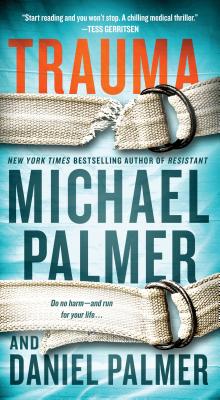 Prepare to be hooked from page one of this shock-inducing medical thriller from
New York Times bestselling author Michael Palmer and his son, acclaimed suspense novelist Daniel Palmer.

Dr. Carrie Bryant is a much-admired neurosurgical resident at an esteemed Boston hospital. When the relentless pace of her residency leads to a life-shattering error, Carrie loses her confidence—and decides to quit her residency and move back home. Her new life’s purpose: To help her combat-vet brother, Adam, recover from a crippling case of post-traumatic stress disorder.

“A unique novel that shows the strength of both authors’ work.”—Mystery Scene

The experimental program at the VA Medical Center promises the possibility of curing the ravages of PTSD forever. It seems like Adam’s best option, but Carrie has her doubts when one of her patients goes missing…and then another. Carrie joins local investigative reporter David Hoffman in the hunt for answers. The hospital, however, is determined to keep its secrets at all costs. As Carrie and David descend into a labyrinth of murder and corruption, the price Carrie could pay for asking the wrong questions is her own life…

“When it comes to inventive plots for medical thrillers, nobody does it better than Michael Palmer.”—Huffington Post

Praise For Trauma: A Novel…

“Palmer's growing audience will find much to enjoy here, as will medical-thriller fans of all stripes.” —Booklist on Resistant