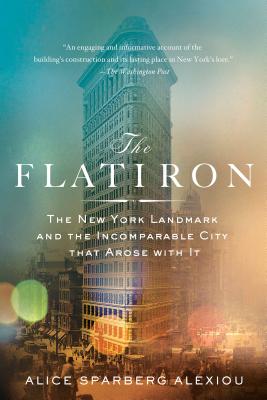 Critics hated it. The public feared it would fall over. Passersby were knocked down by the winds. But even before it was completed, the Flatiron Building had become an unforgettable part of New York City.

Alice Sparberg Alexiou chronicles not just the story of the building, but the heady times in which it was built. It was the dawn of the twentieth century, a time when Madison Square Park shifted from a promenade for rich women to one for gay prostitutes; when photography became an art; motion pictures came into existence; the booming economy suffered increasing depressions; jazz came to the forefront of popular music—and all within steps of one of the city's best-known and best-loved buildings.


Praise For The Flatiron: The New York Landmark and the Incomparable City That Arose with It…

“Alexiou -- a native New Yorker and the granddaughter of a man who for a time owned the Flatiron Building in partnership with Harry Helmsley -- has written an engaging and informative account of the building's construction and its lasting place in New York's lore.” —The Washington Post

“Alice Sparberg Alexiou's The Flatiron joins such books as Jill Jonnes's Conquering Gotham (2007), about Pennsylvania Station, and Gail Fenske's The Skyscraper and the City (2008), about the Woolworth Building, in a budding genre that we might call biographies of buildings.” —The Wall Street Journal

“Though she ends on a note of permanence, as the landmarked and restored Flatiron is here to stay, Ms. Alexiou's book is ultimately about the never-ending change that rushes by in the city, and, in evoking that, she succeeds.” —The New York Observer

“The first history book about The Flatiron, one of New York City's first skyscrapers, built in 1902, and still a favorite sightseeing stop for tourists.” —Deseret News

“[Alice Sparberg-Alexiou] brings the building alive by profiling not only its owners and tenants but also the city's mixed reaction to it.” —The Christian Science Monitor

“Alice Sparberg Alexiou elucidates the complex web of human relationships built around the Flatiron, bringing life to the poignant and tragic story of the skyscraper, its creators, denizens, and critics in New York 1900--a rich and contentious setting shaped not only by buildings, streets, and squares, and the popular arts of music, theater, and film, but also by unbridled speculation, gambling, corruption, conflict, and intrigue.” —Gail Fenske, author of The Skyscraper and the City

ALICE SPARBERG ALEXIOU is the author of Jane Jacobs: Urban Visionary and The Flatiron: The New York Landmark and the Incomparable City That Arose with It. She is a contributing editor at Lilith magazine and she blogs for the Gotham Center. She is a graduate of Columbia University Graduate School of Journalism and has a Ph.D. in classics from Fordham University. She lives in New York.
Loading...
or support indie stores by buying on