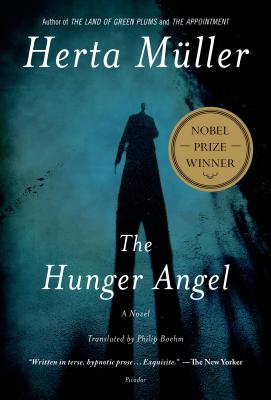 It was an icy morning in January 1945 when the patrol came for seventeen-year-old Leo Auberg to deport him to a camp in the Soviet Union. Leo would spend the next five years in a coke processing plant, shoveling coal, lugging bricks, mixing mortar, and battling the relentless calculus of hunger that governed the labor colony: one shovel load of coal is worth one gram of bread.

In The Hunger Angel, Nobel laureate Herta Müller calls upon her unique combination of poetic intensity and dispassionate precision to conjure the distorted world of the labor camp in all its physical and moral absurdity. She has given Leo the language to express the inexpressible, as hunger sharpens his senses into an acuity that is both hallucinatory and profound. In scene after disorienting scene, the most ordinary objects accrue tender poignancy as they acquire new purpose—a gramophone box serves as a suitcase, a handkerchief becomes a talisman, an enormous piece of casing pipe functions as a lovers' trysting place. The heart is reduced to a pump, the breath mechanized to the rhythm of a swinging shovel, and coal, sand, and snow have a will of their own. Hunger becomes an insatiable angel who haunts the camp, but also a bare-knuckled sparring partner, delivering blows that keep Leo feeling the rawest connection to life.

Müller has distilled Leo's struggle into words of breathtaking intensity that take us on a journey far beyond the Gulag and into the depths of one man's soul.


Praise For The Hunger Angel: A Novel…

“A work of rare force, a feat of sustained and overpowering poetry…Muller has the ability to distil concrete objects into language of the greatest intensity and to sear these objects on to the reader's mind.” —The Times Literary Supplement

“Unflinching. . .Ms. Müller's vision of a police state manned by plum thieves reads like a kind of fairy tale on the mingled evils of gluttony, stupidity, and brutality.” —The New York Times on The Land of Green Plums

“Müller has triumphed in her honesty. . . . Describes in precisely hewn detail what it was like to live in Romania under communism.” —The Washington Post on The Land of Green Plums

“This heartbreaking tale is bitter and dark, yet beautiful... stark and telling.” —The San Diego Union-Tribune on The Land of Green Plums

“Ms. Müller's rich, harsh, obsessive imagery captures the surreal beauty and the difficulty of Ceausescu-era Romania.” —The Boston Book Review on The Land of Green Plums

“Impressive, wholly authentic . . .a bleak fable with the flickering intensity of a nightmare.” —International Herald Tribune on The Land of Green Plums

Herta Müller is the winner of the 2009 Nobel Prize in Literature, as well as the International IMPAC Dublin Literary Award and the European Literature Prize. She is the author of, among other books, The Hunger Angel and The Land of Green Plums. Born in Romania in 1953, Müller lost her job as a teacher and suffered repeated threats after refusing to cooperate with Ceausescu's secret police. She succeeded in emigrating in 1987 and now lives in Berlin.
Loading...
or support indie stores by buying on