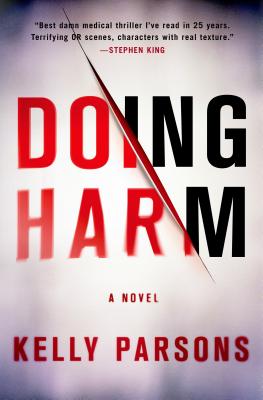 There are many ways to die in a hospital…being sick is only one of them.

Chief resident Steve Mitchell is the quintessential surgeon: ambitious, intelligent, confident. Charged with molding a group of medical trainees into doctors, and in line for a coveted job, Steve's future is bright. But then a patient mysteriously dies, and it quickly becomes clear that a killer is on the loose in his hospital. A killer set on playing a deadly game with Steve. A killer holding information that could ruin his career and marriage. Now, alone and under a cloud of suspicion, Steve must discover a way to outsmart his opponent and save the killer's next victim before the cycle repeats itself again and again…

A chilling and compelling thriller that also takes you into the hospital and details the politics and hierarchy among doctors, as well as the life and death decisions that are made by flawed human beings, Kelly Parsons' Doing Harm marks the gripping debut of a major fiction career.


Praise For Doing Harm: A Novel…

“A twist worthy of a surgical knot. Flawed characters standing on moral pedestals. Insight into the world of medicine and the ambitious geniuses who make life and death decisions. Doing Harm is more faction than fiction, presenting a world so close to our own that you find yourself second guessing the characters as if they're sitting next to you. Repeatedly, I found myself breathless and troubled yet compelled to keep reading. Brilliant.” —Ridley Pearson, author of Choke Point

“A classic cat-and-mouse game with a refreshing, unexpected twist. It opens with some remarkable bait--dangling a hook that the reader will definitely want to bite. Top notch storytelling.” —Steve Berry, author of The King's Deception

KELLY PARSONS is a board-certified urologist with degrees from Stanford University, University of Pennsylvania, and Johns Hopkins, and he is on the faculty at the University of California San Diego.  He lives with his family in Southern California.  Doing Harm is his first novel.
or
Not Currently Available for Direct Purchase