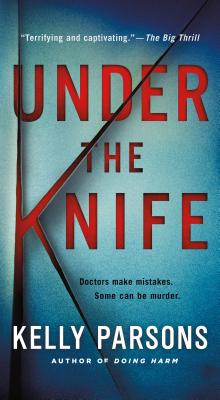 A MAN IS DEAD-SET ON KILLING THE DOCTOR WHO KILLED HIS WIFE IN UNDER THE KNIFE, AN UNPUTDOWNABLE THRILLER FROM THE AUTHOR OF DOING HARM

Biotechnology tycoon Morgan Finney is highly intelligent but shy and emotionally fragile. When his beloved wife, Jenny, dies of complications during a surgery led by Dr. Rita Wu, Finney’s grief turns to rage. He vows to kill Rita just as he believes she killed Jenny.

But first Finney will systematically destroy her life. He will take what is precious to her just as she did to him. Aided by a mysterious man, Finney uses advanced medical technology to ruin Rita’s reputation and bring her to the brink of madness. Alone, fighting for her life, Rita reaches out to her former lover, Dr. Spencer Cameron, for help. Together, they must fight to uncover Finney’s horrific intentions and race to stop him before it’s too late.

“An engrossing story about revenge, grief, technology, and hospital practices. . . Kelly Parsons is well underway to becoming one of the top authors in the medical thriller genre.”—Associated Press

KELLY PARSONS is a board-certified urologist with degrees from Stanford University, University of Pennsylvania, and Johns Hopkins, and he is on the faculty at the University of California San Diego.  He lives with his family in Southern California.  Doing Harm is his first novel.
Loading...
or
Not Currently Available for Direct Purchase