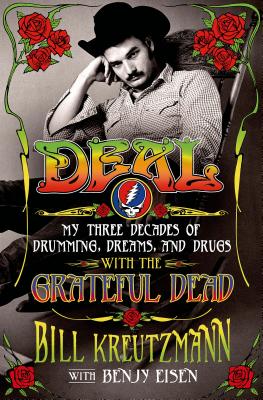 The Grateful Dead are perhaps the most legendary American rock band of all time. For thirty years, beginning in the hippie scene of San Francisco in 1965, they were a musical institution, the original jam band that broke new ground in so many ways. From the music to their live concert sound systems and fan recordings, they were forward-thinking champions of artistic control and outlaw artists who marched to the beat of their own drums.

In the New York Times bestseller Deal, Bill Kreutzmann, one of their founding members and drummer for every one of their over 2,300 concerts has written an unflinching and wild account of playing in the greatest improvisational band of all time. Everything a rock music fan would expect is here, but what sets this apart is Bill's incredible life of adventure that was at the heart of the Grateful Dead experience. This was a band that knew no limits and Bill lived life to the fullest, pushing the boundaries of drugs, drums and high times, through devastating tragedy and remarkable triumph.

But at this book's beating heart is the music--theirs and others. Some of the greatest musicians and concerts were a part of the Grateful Dead's career, from sharing the stage with Janis Joplin, Bob Dylan, and The Who, to playing in the Acid Tests, The Monterey Pop Festival, Woodstock and Altamont. Bill's life is a chronicle of American music and pop culture history and his epic personal journey is one of sonic discovery and thrilling experiences.

“Like any formidable memoir from a counterculture veteran, Deal: My Three Decades of Drumming, Dreams, and Drugs with the Grateful Dead is heavy on sex, drugs, and rock 'n' roll. You know the kind I'm talking about: hotel after-parties that snap into orgies, acid trips that trail across decades and more than 2,000 concerts that begin in small clubs and lead to gigs alongside the Great Pyramid of Egypt.
But Bill Kreutzmann, founding drummer of the Grateful Dead, has produced more than just a tourist's guide. What emanates, maybe more than he intended, is a testimony to friendship and profound sadness when it abruptly ends.... The book is dense with acid trips and capers on both coasts and overseas. Dead fans will enjoy juicy stories. [Deal] reads like Kreutzmann is on the next barstool slapping your back between laughs.” —Chicago Tribune

"A frank and revealing look at the group's touring adventures, complex interpersonal relationships and equally intricate music-making, and at Kreutzmann's own life, including his drug and alcohol issues, the inspiration of Native American chief Rolling Thunder and his mother's tragic suicide death." - Billboard.com

"[Deal] offers plenty of insight, opinion, observations and analysis that are unique and of great interest to fans." - Houston Press

"Admitting that Bill Kreutzmann will give equal space to the drugs along with the drums and dreams captures in a nutshell what made the Grateful Dead such a precious commodity all those years: they told the truth and didn’t try to hide anything. And that’s just what drummer Kreutzmann does, from page one." - The Morton Report

"What is different from other rock biographies . . . is Kreutzmann’s everyman observation. . . . It is a personal tale of universal intention told with humor and the sense of fun that was crucial to the experience of a Grateful Dead concert and the counterculture itself. Like the daily lives of every hippie freak (or an acid trip), it wasn’t always easy street, but it was always an adventure." - Counterpunch.org

"Kreutzmann is casual, matter-of-fact, unaffected and down to earth in a way that makes you feel you've known him for a long time. He can be blunt and brutal at times, but he always feels honest, which for me is the key to a memoir like this. He doesn’t sugarcoat and doesn’t make excuses. Being in the Dead meant lots of drugs, sex and mayhem, and the pages are laced with all of it." - VintageRock.com

"His informal style lends itself well to the increasingly fast pace of his life as he discovers the pleasure of music, his passion for playing and his abiding devotion to the Dead as they coalesced in the mid-Sixties." - GlideMagazine.com

BILL KREUTZMANN was the drummer and co-founder of the legendary rock band, The Grateful Dead. He played in every one of their over 2,300 shows from the first one on May 5th, 1965 until its dissolution following the passing of Garcia in 1995 and on every album. He lives in Hawaii.

BENJY EISEN has written for Rolling Stone, Esquire, Relix and so on. He lives in San Francisco, where he is currently finishing work on his first novel, Oysterland. Upon completion of Deal, he cut a deal with Kreutzmann and is now his manager.