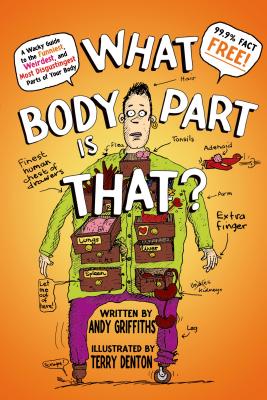 What Body Part Is That?

A Wacky Guide to the Funniest, Weirdest, and Most Disgustingest Parts of Your Body

In its 68 fully illustrated, 99.9% fact-free chapters, Andy Griffiths's and Terry Denton's What Body Part Is That? will explain everything you ever needed to know about your body without the boring technical jargon and scientific accuracy that normally clog up the pages of books of this type.

Never again will you be stuck for an answer when somebody comes up to you, points at a part of your body and demands to know, "What body part is that?"

That is all there is to know about this book.


Praise For What Body Part Is That?: A Wacky Guide to the Funniest, Weirdest, and Most Disgustingest Parts of Your Body…

“Clever…boys will love it.” —Kirkus Reviews

Andy Griffiths is the New York Times bestselling author of The Day My Butt Went Psycho!, Zombie Butts from Uranus!, and Butt Wars! The Final Conflict, as well as the Treehouse Series and Killer Koalas from Outer Space. In 2007, he became the first Australian author to win six children’s choice awards in one year for Just Shocking! He is passionate about inspiring a love of books in his young readers, and works as an ambassador for the Indigenous Literacy Project, which provides books and literacy resources to remote indigenous communities around Australia. Andy is a big fan of Dr. Seuss and of cauliflower. He lives in Melbourne, Australia, and is Australia’s most popular children’s writer.
Loading...
or
Not Currently Available for Direct Purchase