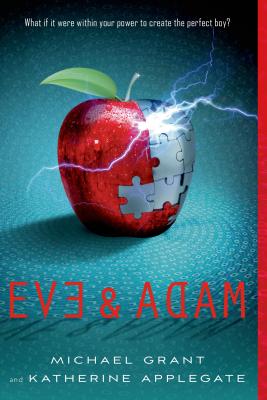 With Eve and Adam, authors Katherine Applegate and Michael Grant team up to create a thrilling story.

In the beginning, there was an apple?

And then there was a car crash, a horrible injury, and a hospital. But before Evening Spiker's head clears a strange boy named Solo is rushing her to her mother's research facility. There, under the best care available, Eve is left alone to heal.

Just when Eve thinks she will die?not from her injuries, but from boredom—her mother gives her a special project: Create the perfect boy.

Using an amazingly detailed simulation, Eve starts building a boy from the ground up. Eve is creating Adam. And he will be just perfect . . . won't he?


Praise For Eve and Adam…

“Observant, smart, and unencumbered by emotion, this is a tasty read that readers will devour in a flash.” —Publishers Weekly

“The husband and wife team behind the Animorphs series returns with the first installment of an entertaining saga that pits smart teens against high-tech evildoers and bionic skullduggery.” —Kirkus

“Grant and Applegate portray a chilling brave new world of genetic technology, presenting fascinating speculative possibilities that are weighed against their moral implications.” —The Horn Book

Michael Grant is the author of BZRK and the bestselling Gone series. He and his wife, Katherine Applegate, are also the authors of the popular Animorphs series. They live in Northern California with their two children.
or support indie stores by buying on