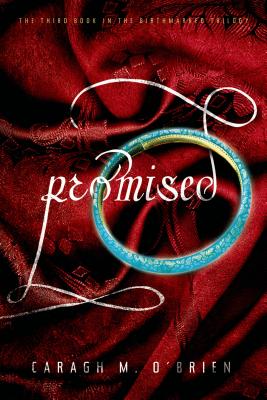 Caragh M. O'Brien's Promised is the conclusion to the thrilling YA dystopian adventure Birthmarked Trilogy, where the world is divided between those who live inside the wall and those who live outside.

After defying the ruthless Enclave, surviving the wasteland, and upending the rigid matriarchy of Sylum, Gaia Stone now faces her biggest challenge ever. She must lead the people of Sylum back to the Enclave and persuade the Protectorat to grant them refuge from the wasteland. In Gaia's absence, the Enclave has grown more cruel, more desperate to experiment on mothers from outside the wall, and now the stakes of cooperating or rebelling have never been higher. Is Gaia ready, as a leader, to sacrifice what—or whom—she loves most?


Praise For Promised: The Birthmarked Trilogy…

“An interesting mixture of fantasy and science fiction.” —VOYA, December 2012

“…a satisfying finish to a strong series that deftly mixed romance and, of all things, genetics.” —Booklist, October 1, 2012

Caragh M. O’Brien is the author of the BIRTHMARKED trilogy and THE VAULT OF DREAMERS trilogy. Born in St. Paul, Minnesota, Ms. O’Brien was educated at Williams College and earned her MA in the Writing Seminars from Johns Hopkins University. Her young adult science fiction has been honored by the YALSA Best Fiction for Young Adults, the Amelia Bloomer Award, the Junior Library Guild, and numerous state reading lists. A former high school English teacher, she now writes young adult novels full time from her home in rural Connecticut.
Loading...
or
Not Currently Available for Direct Purchase