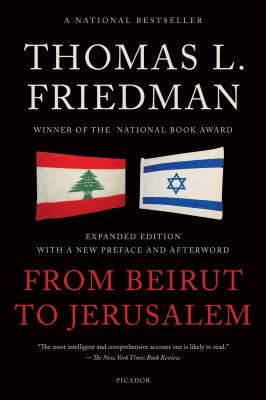 From Beirut to Jerusalem

"If you're only going to read one book on the Middle East, this is it."---Seymour M. Hersh

One of the most thought-provoking books ever written about the Middle East, From Beirut to Jerusalem remains vital to our understanding of this complex and volatile region of the world. Three-time Pulitzer Prize winner Thomas L. Friedman drew upon his ten years of experience reporting from Lebanon and Israel to write this now-classic work of journalism. In a new afterword, he updates his journey with a fresh discussion of the Arab Awakenings and how they are transforming the area, and a new look at relations between Israelis and Palestinians, and Israelis and Israelis. Rich with anecdote, history, analysis, and autobiography, From Beirut to Jerusalem will continue to shape how we see the Middle East for many years to come.


Praise For From Beirut to Jerusalem…

“The most intelligent and comprehensive account one is likely to read.” —The New York Times Book Review

“A book that must be read by all who are concerned about the present and future of a part of our world to which Western civilization has always been, and will continue to be, vitally connected.” —The Washington Post Book World

“A sparkling intellectual guidebook…An engrossing journey not to be missed.” —The Wall Street Journal

“A complex, illuminating vision written with a novelist's eye for the telling detail and a reporter's knack for the revealing quote.” —San Francisco Chronicle

“Perhaps no other book written for a popular audience has so successfully explained the unexplainable….This book is an annotated road map to the past, and a brilliant crystal ball for the future.” —St. Louis Post-Dispatch

“Fascinating...Friedman has mastered his subject.” —Time