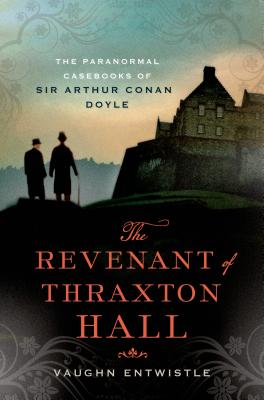 The Revenant of Thraxton Hall (Hardcover)

Arthur Conan Doyle has just killed off Sherlock Holmes in "The Final Problem," and he immediately becomes one of the most hated men in London. So when he is contacted by a medium "of some renown" and asked to investigate a murder, he jumps at the chance to get out of the city. The only thing is that the murder hasn't happened yet the medium, one Hope Thraxton, has foreseen that her death will occur at the third seance of a meeting of the Society for Psychical Research at her manor house in the English countryside.

Along for the ride is Conan Doyle's good friend Oscar Wilde, and together they work to narrow down the list of suspects, which includes a mysterious foreign Count, a levitating magician, and an irritable old woman with a "familiar." Meanwhile, Conan Doyle is enchanted by the plight of the capricious Hope Thraxton, who may or may not have a more complicated back-story than it first appears. As Conan Doyle and Wilde participate in seances and consider the possible motives of the assembled group, the clock ticks ever closer to Hope's murder, in The Revenant of Thraxton Hall by Vaughn Entwistle.

VAUGHN ENTWISTLE grew up in Northern England. He is the author of The Paranormal Casebooks of Sir Arthur Conan Doyle series. In the early nineties he moved to Seattle to work as a writer, and in his spare time he ran a successful gargoyle-sculpting company for ten years. He often writes with one cat on his lap, a Brittany lying across his feet, and one or more cats sauntering across the keyboard. He recently moved back to England.

Praise For The Revenant of Thraxton Hall: The Paranormal Casebooks of Sir Arthur Conan Doyle…

"Entwistle is a talented writer who has written an imaginative story with vivid period details and a compelling plot. I was hooked from the very first page and can’t wait to read the next book."
—Emily Brightwell, author of the Mrs. Jeffries Victorian mystery series

"The Revenant of Thraxton Hall is a delight.  It’s a treat to meet the Great Detective’s creator (Arthur Conan Doyle) as a sleuth in his own right. And partnered with Oscar Wilde—what a bold and wonderful conceit!"
—John Lescroart, New York Times bestselling author of The Ophelia Cut

"Entwistle gives the man who created Sherlock Holmes his own mystery to solve in this amazing novel. Arthur Conan Doyle proves himself worthy of Holmes’s mantle as he and his clever friend Oscar Wilde untangle a decades-old mystery to save a beautiful young woman’s life."
—Victoria Thompson, author of Murder in Chelsea

"Thrilling, suspenseful and utterly captivating, The Revenant of Thraxton Hall ingeniously combines historical fact with creative imagination. Conan Doyle and Wilde are a unique and lively recombination of Holmes and Watson, and once again, the game is most assuredly afoot. Don’t miss it!"
—Kelli Stanley, Macavity Award winning author of City of Dragons

“Entwistle’s prose is eloquent and evocative without sacrificing concision. His staging of Victorian London—its memorial parks, stately homes, fog-shrouded streets is cloaked in suspense, shown through an extensive use of detail and sensory imagery….A magnificently written, provocative novel.” –Kirkus Reviews on Angel of Highgate