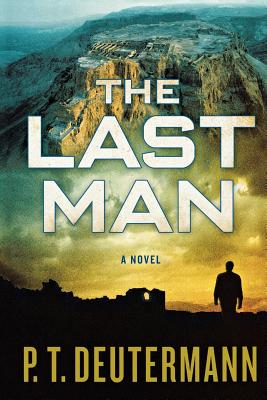 A woman goes missing, sending a young nuclear engineer on a quest deep into the Judean desert to the legendary fortress of Masada, where secrets are concealed

When a young Israeli woman suddenly goes missing, her boyfriend, an American nuclear engineer, suspects her disappearance is connected to her tantalizing theory about the haunting fortress of Masada. He decides to travel to Herod's 2000 year old mountain fortress to see if her theory was right. There, he makes a discovery so astonishing that forces from the dark side of Israeli intelligence begin to converge on him to deflect his pursuit of the truth by any means necessary. With the aid of a beautiful Israeli archaeologist, he struggles to bring to light the treasures he believes are concealed in the mountain, unaware that there is a dangerous contemporary secret at stake.

P.T. Deutermann's fifteenth novel, The Last Man, brings all the excitement and pulse-thumping action his fans have come to expect.

P. T. DEUTERMANN is the author of many previous novels including Pacific Glory, which won the W. Y. Boyd Literary Award for Excellence in Military Fiction. Deutermann spent twenty-six years in military and government service, as a captain in the Navy and in the Joint Chiefs of Staff as an arms-control specialist. He lives with his wife in North Carolina.

Praise For The Last Man: A Novel…