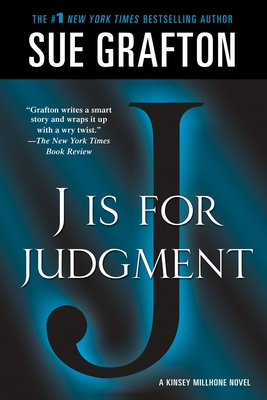 "J" is for Judgment

The next in the Kinsey Millhone Alphabet mystery series from bestselling author Sue Grafton.

"J" is for Jaffe: Wendell Jaffe, dead these past five years. Or so it seemed until his former insurance agent spotted him in the bar of a dusty little resort halfway between Cabo San Lucas and La Paz.

"In truth, the facts about Wendell Jaffe had nothing to do with my family history, but murder is seldom tidy and no one ever said revelations operate in a straight line. It was my investigation into the dead man's past that triggered the inquiry into my own, and in the end the two stories became difficult to separate."

Five years ago, when Jaffe's thirty-five-foot Fuji ketch was found drifting off the Baja coast, it seemed a sure thing he'd gone overboard. The note he left behind admitted he was flat broke, his business bankrupt, his real estate gambit nothing but a huge Ponzi scheme about to collapse, with criminal indictment certain to follow. When the authorities soon after descended on his banks and his books, there was nothing left: Jaffe had stripped the lot.

"Given my insatiable curiosity and my natural inclination to poke my nose in where it doesn't belong, it was odd to realize how little attention I'd paid to my own past. I'd simply accepted what I was told, constructing my personal mythology on the flimsiest of facts."

But Jaffe wasn't quite without assets. There was the $500,000 life insurance policy made out to his wife and underwritten by California Fidelity. With no corpse to prove death, however, the insurance company was in no hurry to pay the claim. Dana Jaffe had to wait out the statutory five years until her missing husband could be declared legally dead. Just two months before Wendell Jaffe was sighted in that dusty resort bar, California Fidelity finally paid in full. Now they wanted the truth. And they were willing to hire Kinsey Millhone to dig it up.

As Kinsey pushes deeper into the mystery surrounding Wendell Jaffe's pseudocide, she explores her own past, discovering that in family matters as in crime, sometimes it's better to reserve judgment.

"J" is for judgment: the kind we're quick to make and often quicker to regret.

"J" Is for Judgment: Kinsey Millhone's tenth excursion into the dark places of the heart where duplicity is the governing rule and murder the too-frequent result.

“Book for book, this may be the most satisfying mystery series going.” —Tom Nolan, The Wall Street Journal

“Grafton is setting a standard that is going to prove difficult for others in her crowded field to match, let alone surpass.” —Lorenzo Carcaterra, People

#1 New York Times bestselling author Sue Grafton (1940-2017) entered the mystery field in 1982 with the publication of 'A' Is for Alibi, which introduced female hard-boiled private investigator, Kinsey Millhone, operating out of the fictional town of Santa Teresa, (aka Santa Barbara) California, and launched the bestselling Kinsey Millhone Alphabet Mysteries. In addition to her books, she published several Kinsey Millhone short stories, and with her husband, Steven Humphrey, wrote numerous movies for television, including “A Killer in the Family” (starring Robert Mitchum), “Love on the Run” (starring Alec Baldwin and Stephanie Zimbalist) and two Agatha Christie adaptations, “Sparkling Cyanide” and “Caribbean Mystery,” which starred Helen Hayes. Grafton is published in 28 countries and in 26 languages.
Loading...
or support indie stores by buying on