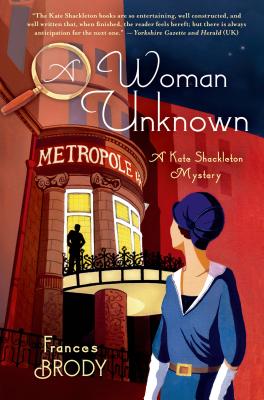 A Library Journal Best Book of 2014

A winning combination of both intricate plotting and nostalgic post-WWI English country setting, Frances Brody's A Woman Unknown will appeal to fans of both classic murder mysteries in the vein of Agatha Christie as well as readers of historical mystery series set in 1920s England, two popular subgenres.

The Woman Unknown: Deirdre Fitzpatrick is married to a man who wants to know where she really goes when supposedly taking care of her sick mother and calls on the expertise of Kate Shackleton, amateur sleuth extraordinaire to investigate.

The Gentleman: Everett Runcie is a banker facing ruin and disgrace. His American heiress wife will no longer pay for his mistakes, or tolerate his infidelity, and is seeking a divorce.

The Murder: When a chambermaid enters Runcie's hotel room, she is shocked to find that he is alone - and dead! Suddenly Kate is thrown into the depths of an altogether more sinister investigation. Can she uncover the truth of her most complex, and personal, case to date?


Praise For A Woman Unknown (A Kate Shackleton Mystery #4)…

“Brody's spirited and stalwart protagonist has found her true calling in solving mysteries, and her fourth case (after Murder in the Afternoon) holds true. Fans of Jacqueline Winspear and Agatha Christie will enjoy these historical mysteries set in 1920s England as entertaining read-alikes.” —Library Journal