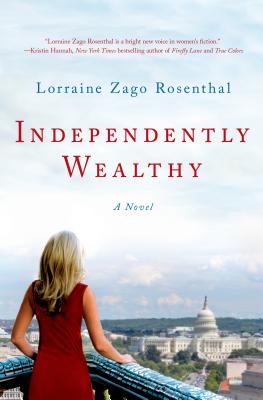 In Lorraine Zago Rosenthal's sequel to New Money, Savannah Morgan delves into the mystery of her late media mogul father's death and uncovers more than she ever expected.

In New Money, Savannah Morgan was thrust into high society New York when she learned she was the sole heir to her media mogul father's billion dollar fortune. In Independently Wealthy she is living her dream life on the Upper West Side, excelling at her job as an editorial assistant, and enjoying her handsome new boyfriend, Alex.

Everything in Savannah's life should be perfect—except she can't ignore the mystery of her father's death. Her hopes of solving this complicated and dangerous mystery are shared by Caroline Stone—her newfound sister who is slowly becoming a friend. Savannah decides to investigate, but not everyone wants Savannah to know the truth. Her domineering older brother, Ned has his own problems, including a lingering regret over his recent divorce, the constant pressure of running the Stone media empire, and managing a playboy bachelorhood. As Savannah's quest for the truth becomes more complicated and dangerous she is led to Washington, D.C., an alluring stranger, and more surprises, trouble, and changes than she ever could have imagined.

Readers will be swept away by Savannah Morgan once again as she unravels the mystery of her father's death on Capitol Hill with all the charm and perseverance of when she first arrived in New York City.


Praise For Independently Wealthy: A Novel…

“[Rosenthal] combines alluring lifestyles of the rich and famous with the story of a young, impulsive woman determined to uncover the answers at any cost…enjoy the scenes of parties, nightlife, and New York news milieu.” —Library Journal

“Savannah has a heart of gold...Readers will root for her, both in trying to solve her father's death and in her romantic endeavors.” —Romantic Times

“Soapy, fast-paced fun with a murder thrown in for good measure.” —Kirkus Reviews

“Lorraine Zago Rosenthal has done it again! In Independently Wealthy, she gives us a story filled with romance, scandal, and even a mystery surrounding the death of our heroine's father.” —Brenda Janowitz, author of Recipe for a Happy Life

LORRAINE ZAGO ROSENTHAL was born and raised in New York City. She earned a bachelor's degree in psychology and a master's degree in education from the University of South Florida. She also earned a master's degree in English, with a concentration in American and British literature, from Northern Kentucky University. Lorraine’s debut novel, Other Words for Love, was published in 2011. She currently lives near Cincinnati, Ohio with her husband.
Loading...
or
Not Currently Available for Direct Purchase