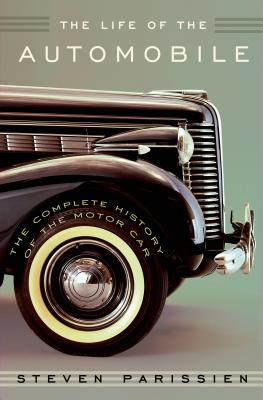 The Life of the Automobile

The Complete History of the Motor Car

The Life of the Automobile is the first comprehensive world history of the car.

The automobile has arguably shaped the modern era more profoundly than any other human invention, and author Steven Parissien examines the impact, development, and significance of the automobile over its turbulent and colorful 130-year history. Readers learn the grand and turbulent history of the motor car, from its earliest appearance in the 1880s—as little more than a powered quadricycle—and the innovations of the early pioneer carmakers. The author examines the advances of the interwar era, the Golden Age of the 1950s, and the iconic years of the 1960s to the decades of doubt and uncertainty following the oil crisis of 1973, the global mergers of the 1990s, the bailouts of the early twenty-first century, and the emergence of the electric car.

This is not just a story of horsepower and performance but a tale of extraordinary people: of intuitive carmakers such as Karl Benz, Sir Henry Royce, Giovanni Agnelli (Fiat), André Citroën, and Louis Renault; of exceptionally gifted designers such as the eccentric, Ohio-born Chris Bangle (BMW); and of visionary industrialists such as Henry Ford, Ferdinand Porsche (the Volkswagen Beetle), and Gene Bordinat (the Ford Mustang), among numerous other game changers.

Above all, this comprehensive history demonstrates how the epic story of the car mirrors the history of the modern era, from the brave hopes and soaring ambitions of the early twentieth century to the cynicism and ecological concerns of a century later. Bringing to life the flamboyant entrepreneurs, shrewd businessmen, and gifted engineers that worked behind the scenes to bring us horsepower and performance, The Life of the Automobile is a globe-spanning account of the auto industry that is sure to rev the engines of entrepreneurs and gearheads alike.


Praise For The Life of the Automobile: The Complete History of the Motor Car…

“Steven Parissien's exhaustive, century-long global overview, The Life of the Automobile lavishes careful attention on the drama, rivalries and infighting that have propelled the industry...The book excels at revealing little-known lore about the titans who are ­commonly, but mistakenly, remembered as infallible geniuses...It would serve today's [auto] leaders well to remember the heroes and villains behind the cars that boomed and busted in Parissien's cautionary tale.” —New York Times Sunday Book Review

“This elegant and authoritative work demonstrates the historical links among people, machines, and cultures on a global scale. For readers who enjoy investigations into social, intellectual, business, technology, or transportation history - as well as dedicated car buffs.” —Library Journal (starred review)

“There are hundreds of wonderfully worth cars parked butt-to-snout in this monumental, well-polished survey--130 years of automotive stars and stinkers to please (almost) anyone… Mr. Parissien has compiled a serious history that should be welcomed by anyone with an interest in industrial history. What's more, the book is filled with…delightful trivia.” —The Wall Street Journal

“This sweeping attempt to trace the development, dominance, and refiguring of the car offers some terrific glimpses at the vast and varied worldwide story of the automobile. Parissien, a versatile and enthusiastic English historian, offers entertaining vignettes of late–19th-century car pioneers, from German engineer Karl Benz and his first-ever long car trip from Mannheim to Pforzsheim and car maker Louis Renault. Parissien is at his best with encapsulated corporate histories of such automakers as Ford and Nissan. Along the way he offers devastating portraits of "out of touch" executives who oversaw the decline and fall of Detroit's Big Three car makers in the decades after the energy crises of the 1970s.” —Publishers Weekly

“Parissien's exhaustive overview of the evolution of the automobile follows the classic story of this backbone of industrialization with its successes, rivalries, declines, and resurrections that continue to this day. From the Ford Model T to the Chevrolet Volt, Parissien covers every detail, including the sketchy safety and environmental record and a nod to the future of green technology.” —Booklist (starred review)

“For the car completist, this is a soup-to-nuts (or nuts-to-bolts) history of the development of the automobile. From its start as a glorified bicycle in the 1880s to the development of alternative fuel cars of today, Parissien covers the high points (the "chrome age" in the 1950s) and the low ("the DeLorean") in this entertaining, enthusiastic history of all-things car.” —New York Public Library, Book Notes from the Underground

“A good description and analysis of major players such as André Citroën, William Durant, Henry Ford, Ferdinand Porsche, Louis Renault, and Alfred Sloan. Overall, this is a well-written, interesting history of the car, painted in broad strokes.” —CHOICE

“Takes a wide-ranging look at the machine that perhaps more than any other has shaped the modern world, its impact, and the human beings behind it.” —Tampa Bay Times

“A fresh look [that will] fascinate anyone interested in the history of the industry.” —Daily Express (UK)

“From a Ford Model-T, by way of glitzy Cadillacs, cool Golfs and hot Minis, to futuristic autos, this is an exhilarating ride over some bumpy roads.” —Saga Magazine (UK)

“A well-informed and elegant assessment of George's impact on Regency times, especially its culture.” —Sunday Telegraph on George IV

DR. STEVEN PARISSIEN is an internationally-renowned author who has written extensively on architectural and cultural history including Assassinated!, Interiors, George IV, among others. He is the director of Compton Verney museum and gallery in Warwickshire and a Visiting Fellow at the Universities of Oxford and Warwick. He lives in Oxford, England, and has one daughter.
Loading...
or support indie stores by buying on