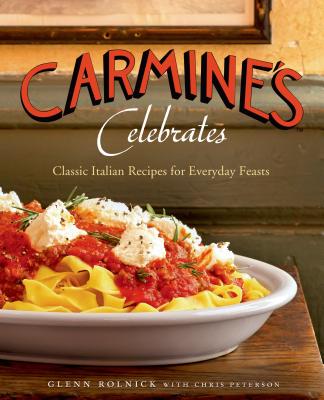 Carmine's is founded on the twin concepts of deliciousness and Italian abbondanza. In their wildly popular Times Square flagship location and their other restaurants in New York City, Atlantic City, Las Vegas, Washington, DC, and Paradise Island, Bahamas, the tables are filled with giant platters of pasta, steaks, chicken, vegetables and more. And every single diner has a smile on his face. Now that concept comes home from the masters. In new cookbook Carmine's Celebrates, Chef Glenn Rolnick teaches home cooks how to make more than one hundred dishes in happy-making quantities. Nothing is difficult to make, serve or store. Each dish uses grocery store ingredients and extracts the flavor of Italy from them so anyone can be an amazing cook. There is a special emphasis on "everyday" holidays, such as weekend family dinners, and also on traditional holiday food for Easter, Thanksgiving and Christmas.

“When you think of Southern Italian food, it's hard to ignore Carmine's, which pioneered the family style Italian restaurants that have been so popular.” —New York Times

“Getting a table...is a pretty tough ticket, even by Theater District standards. But despite the roar of the crowd, the staff makes every table feel like the only one.” —Time Out New York

GLENN ROLNICK is the Director of Culinary Operations for the Alicart Restaurant Group, where he has worked for the last eleven years. A former chef at The Algonquin Hotel and The Carlyle Hotel in New York City, Rolnick is a graduate of the Culinary Institute of America. He has appeared on Good Morning America, the Fox Business Network and has contributed to Time, The New York Times and the New Yorker.
Loading...
or
Not Currently Available for Direct Purchase