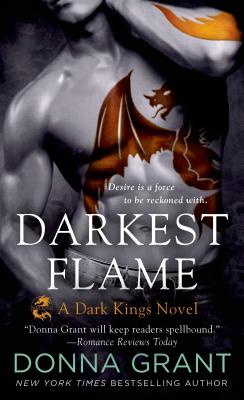 In Darkest Flame by Donna Grant, the Dark Kings have fought for centuries to preserve their dragon magic. But one of the most powerful warriors of his kind will be put to the ultimate test. Is he strong enough to resist his greatest temptations? Or will he be forced to surrender—body and soul?
HER BEAUTY IS A WEAPON.
Denae Lacroix is a beautiful MI5 agent on a deadly mission. Sent to the Scottish Highlands to spy on the mysterious Dreagan Industries, she discovers too late that she's been set up—as human bait. She is an irresistible lure for a man who has not seen or touched a woman for centuries. He is a man with a destiny—and a desire—that could destroy them both…
HIS PASSION IS A CURSE…
It's been twelve hundred years since Kellan has walked among humans—and there's no denying the erotically charged attraction he feels for Denae. But as a Dragon King, he is sworn to protect his secrets. Yet the closer he gets to this smart, ravishing woman, the more her life is in danger. All it takes is one reckless kiss to unleash a flood of desire, the fury of dragons…and the fiercest enemy of all.
"Time travel, ancient legends, and seductive romance are seamlessly interwoven into one captivating package."—Publishers Weekly on the Dark Warrior series
"Once again, Donna Grant has given the readers a great story." —Night Owl Reviews Top Pick on MIDNIGHT'S PROMISE

“4 Stars! Loaded with subtle emotions, sizzling chemistry and some provocative thoughts on the real choices [Grant's] characters are forced to make as they choose their loves for eternity. ” —RT Book Reviews on Dark Heat

“A 5 Star, not to miss, read!” —Night Owl Reviews on MIDNIGHT'S KISS

“This story is one you will remember long after the last page is read.” —Romance Junkies on MIDNIGHT'S KISS

“4 1/2 Stars! Grant has crafted a chemistry between her wounded alpha and surprisingly capable heroine that will, no doubt, enthrall series fans and newcomers alike.” —RT Book Reviews on MIDNIGHT'S CAPTIVE

“5 Stars! Ms. Grant brings together two people who are afraid to fall in love and then ignites sparks between them.” —Single Title Reviews on MIDNIGHT'S WARRIOR

“Sizzling love scenes and engaging characters fill the pages of this fast-paced and immersive novel.” —Publishers Weekly on MIDNIGHT'S SEDUCTION

“4 Stars! Grant again proves that she is a stellar writer and a force to be reckoned with.” —RT Book Reviews on MIDNIGHT'S SEDUCTION

“4 Stars! It's good vs. evil Druid in the next installment of Grant's Dark Warrior series. The stakes get higher as discerning one's true loyalties becomes harder. Grant's compelling characters and the continued presence of previous protagonists are key reasons why these books are so gripping. Another exciting and thrilling chapter!” —RT Book Reviews on MIDNIGHT'S LOVER