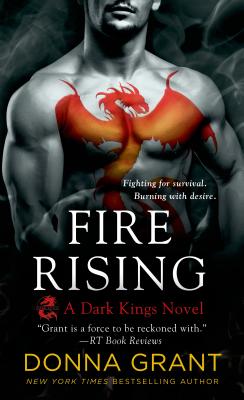 For centuries, the Dragon Kings have battled heaven and earth to protect their dragon magic. But when a beautiful mortal seeks refuge in their lair, she ignites a warrior's love, an enemy's wrath, and a firestorm of passion that could destroy them all…
A WOMAN ON THE RUN
Sammi Miller lives a quiet life as a pub owner in the Scottish Highlands—until the mob bursts in with guns blazing, looking for her ex-lover. Taking a bullet in the shoulder, she manages to escape and make her way to her half-sister Jane. Hidden away in the mountain fortress of the mysterious Dreagan Industries, Sammi finds more than a safe haven. She finds Tristan—the most gorgeous, beguiling, and haunted man she has ever known…
A WARRIOR ON FIRE
Newest of the Dragon Kings, Tristan fell from the sky in a snowstorm naked with a sword—but with no memories of his ancient struggles. When he meets the wounded Sammi, something powerful stirs within his heart. When he sees the dragon symbol etched into the bullet from her shoulder, something fierce burns within his soul. With his darkest enemies closing in, Tristan must take wing, take sides—and take no prisoners—to save the woman he's destined to love…in Fire Rising, second novel in the Dark Kings series

"Donna Grant spins a searing and intense tale [that] will keep readers spellbound."—Romance Reviews Today on the Dark Sword series

“4 Stars! Loaded with subtle emotions, sizzling chemistry and some provocative thoughts on the real choices [Grant's] characters are forced to make as they choose their loves for eternity. ” —RT Book Reviews on Dark Heat

“A 5 Star, not to miss, read!” —Night Owl Reviews on MIDNIGHT'S KISS

“This story is one you will remember long after the last page is read.” —Romance Junkies on MIDNIGHT'S KISS

“4 1/2 Stars! Grant has crafted a chemistry between her wounded alpha and surprisingly capable heroine that will, no doubt, enthrall series fans and newcomers alike.” —RT Book Reviews on MIDNIGHT'S CAPTIVE

“5 Stars! Ms. Grant brings together two people who are afraid to fall in love and then ignites sparks between them.” —Single Title Reviews on MIDNIGHT'S WARRIOR

“Sizzling love scenes and engaging characters fill the pages of this fast-paced and immersive novel.” —Publishers Weekly on MIDNIGHT'S SEDUCTION

“4 Stars! Grant again proves that she is a stellar writer and a force to be reckoned with.” —RT Book Reviews on MIDNIGHT'S SEDUCTION

“4 Stars! It's good vs. evil Druid in the next installment of Grant's Dark Warrior series. The stakes get higher as discerning one's true loyalties becomes harder. Grant's compelling characters and the continued presence of previous protagonists are key reasons why these books are so gripping. Another exciting and thrilling chapter!” —RT Book Reviews on MIDNIGHT'S LOVER