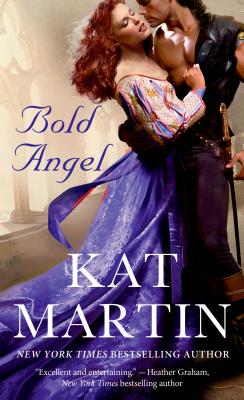 They were enemies in a divided land...
In Bold Angel by Kat Martin, Saxon beauty Caryn of Ivesham longed to escape the chill gray cloisters of the convent to which she'd fled—but not in marriage to the towering, feared Raolfe de Gere, the Norman knight they called Ral the Relentless. Even though he had once saved her from a fate worse than death, she could not forget he'd raised the grim battlements of Braxston Keep on her dead father's lands or that his men had dishonored her sister. If she wed him to bring peace to her people, he would have to lay siege to her bed.

Will their love conquer all—or destroy them both?
The darkly handsome warlord's blood coursed with desire for Caryn's burnished crimson lips, and his passion would not be denied. But in the wild ecstasy they shared, Ral feared more than his heart was in danger. Could his rebellious bride be a traitor deadlier than the wolves and brigands prowling deep in English forests?

"An excellent medieval romance...Readers will not only love this novel, but clamor for a sequel." —Affaire de Coeur

Kat Martin’s bestselling novels include Nothing But Velvet, Innocence Undone, and the Raines of Wind Canyon Series—Against the Wind, Against the Fire, and Against the Law. Her book Silk and Steel was nominated for a RITA Award. She is a graduate of the University of California, where she majored in Anthropology and History, a background that helped to develop her interest in the past. "I love anything old," she says. "I especially love to visit the settings for my books. My husband and I often stay in out-of-the-way inns and houses built in times past. It's fun and it gives a wonderful sense of a bygone era." Before becoming a writer, Martin was a real estate broker. She lives with her husband, author Larry Jay Martin, in Missoula, Montana.

“An excellent medieval romance...Readers will not only love this novel, but clamor for a sequel.” —Affaire de Coeur

“Kat Martin has superbly captured the essence that is the medieval period. Fans will most assuredly ask for more from this talented author.” —Linda Abel, The Medieval Chronicle