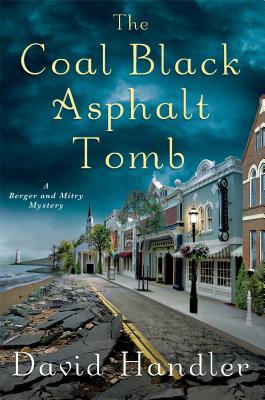 The historic New England village of Dorset has actually elected a living, breathing "woman" as its First Selectman. And now she's about to undertake the Historic District's biggest public works project in a generation the widening and re-grading of Dorset Street. The job has needed doing for ages but the previous First Selectman, Bob Paffin, always opposed it. So did a lot of Dorset's blue-blooded old guard.

The long put-off dig uncovers a body buried underneath the pavement in front of the Congregational Church. It belongs to Lt. Lance Paffin, Bob Paffin's older brother, a dashing U.S. Navy flyer who went missing off his sailboat the night of the country club's spring dance more than forty years ago. Everyone had assumed he just left town. But now it's clear Lance has been under Dorset Street this whole time, and that he was murdered.

Des and Mitch soon discover that there are deep, dark secrets surrounding Dorset's elite, and some very distinguished careers have been built on lies. "Coal Black Asphalt Tomb" is the tenth in David Handler's original and very funny Berger and Mitry mystery series featuring this engaging biracial couple.


“Filled with the colorful characters that David Handler has led us to expect along with great film references, The Coal Black Asphalt Tomb is absolutely fun and charming, and fans of this series are going to want it right away”— Seattle's Mystery Bookshop

"Neither rain, nor sleet, nor dark of night can keep postmen from their appointed rounds. But how about murder?...Fans of Des and Mitch will giggle as Mitch decorates his Hanukkah bush with her teeny weeny yellow bikini."—Kirkus Reviews on The Show White Christmas Cookie

"A must read for fans of hilarious crime dramas . . . The Blood Red Indian Summer is a whirlwind of hilarity, mystery . . . and romance. It is best described by a one-word expression that is often used by Mitch Berger's dad, Chat: 'Sa-weet.'" —Gumshoe Review

"Series fans will have fun catching up with the latest twists in the always interesting relationship of this interracial couple." —Publishers Weekly on The Shimmering Blond

"Well paced and cheerfully written, this book has a number of fun perks." —RT Book Reviews (4 stars) on The Shimmering Blond

"Funny, smart and the perfect antidote to the seasonal treacle, The Snow White Christmas Cookie—the ninth novel by David Handler in the excellent Mitch Berger and Desiree Mitry series—turns the Christmas cozy on its head . . . Don’t mistake this for a traditional holiday novel with lots of cute bits. Handler knows how much sugar needs a dose of realism." —The Globe and Mail

DAVID HANDLER is an Edgar Award winner and Anthony, Derringer, and Dilys Award finalist. He has written extensively for television and films. David is the author of Runaway Man, Snow White Christmas Cookie, Blood Red Indian Summer and Shimmering Blond Sister. He lives in a two-hundred-year-old carriage house in Old Lyme, Connecticut.
Loading...
or
Not Currently Available for Direct Purchase