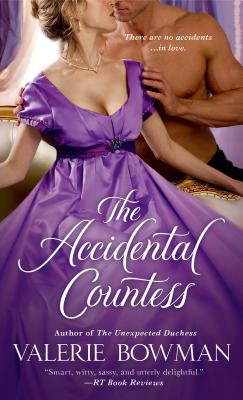 Bestselling author Valerie Bowman sets the stage in Regency England for her Playful Brides series, where couples' misadventures on the way to the altar are witty, romantic romps based on some of the world's most beloved plays. The second entry, The Accidental Countess, is inspired by Oscar Wilde's The Importance of Being Earnest.

CAN A SCANDALOUS CHARADE
For seven long years, Lady Cassandra Monroe has waited for the man of her dreams to return from the war. Unfortunately, he happens to be engaged to her flighty cousin. What Cass wouldn't give to take her cousin's place! When he mistakes Cass for Patience Bunbury, a fictitious friend her cousin has invented to escape social obligations...even with her future husband, Cass thinks this is her chance.

LEAD TO TRUE AND LASTING LOVE?
After defeating Napoleon at Waterloo, Captain Julian Swift is not quite ready to settle down and enter into his unwanted arranged marriage-especially when the real object of his affection turns out to be a beguiling beauty he meets at a party. Patience Bunbury is witty, independent, passionate...and, unbeknownst to him, the cousin of his current fiancée. When the truth about Cass comes out--and Julian discovers that their courtship is anything but accidental--will he surrender his heart to a woman who really is too good to be true?

“Engaging characters, snappy banter, and judicious infusion of smoldering sensuality will have readers clamoring for the next installment in this smart and sexy series.” —Booklist (starred review) on THE UNEXPECTED DUCHESS

“A fun, smart comedy of errors and a sexy, satisfying romance.” —Kirkus (Starred Review) on THE UNEXPECTED DUCHESS

“...a charming take on Cyrano de Bergerac.” —Publishers Weekly on THE UNEXPECTED DUCHESS

Valerie Bowman is an award-winning author who writes Regency-set historical romance novels aka Racy Regency Romps! Since her debut in 2012, Valerie's books have received starred reviews from Publisher's Weekly, Booklist, and Kirkus. She's been an RT Reviewers' Choice nominee for Best First Historical Romance and Best Historical Romance Love and Laughter. Two of her books have been nominated for the Kirkus Prize for fiction and New York Times bestselling author Lisa Kleypas calls them, "Too delightful to miss!"

Valerie has a B.A. in English Language and Literature with a minor in history from Smith College. By day, she is a technical editor at a computer software company. By night, she combines her love of writing, history, and romance to craft stories about people falling in love.

Originally from Rantoul, Illinois, Valerie lives in Jacksonville, Florida with her family including her two rascally dogs. When she's not writing, she keeps busy reading, traveling, or vacillating between watching crazy reality TV or PBS.