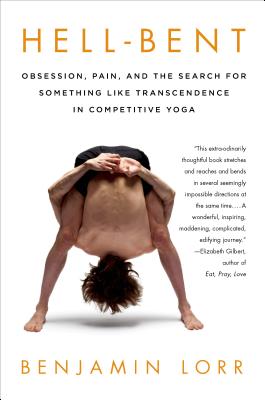 Hell-Bent explores a fascinating, often surreal world at the extremes of American yoga. Benjamin Lorr walked into his first yoga studio on a whim, overweight and curious, and quickly found the yoga reinventing his life. He was studying Bikram Yoga (or "hot yoga") when a run-in with a master and competitive yoga champion led him into an obsessive subculture—a group of yogis for whom eight hours of practice a day in 110- degree heat was just the beginning.

So begins a journey. Populated by athletic prodigies, wide-eyed celebrities, legitimate medical miracles, and predatory hucksters, it's a nation-spanning trip—from the jam-packed studios of New York to the athletic performance labs of the University of Oregon to the stage at the National Yoga Asana Championship, where Lorr competes for glory.

The culmination of two years of research, and featuring hundreds of interviews with yogis, scientists, doctors, and scholars, Hell-Bent is a wild exploration. A look at the science behind a controversial practice, a story of greed, narcissism, and corruption, and a mind-bending tale of personal transformation, it is a book that will not only challenge your conception of yoga, but will change the way you view the fragile, inspirational limits of the human body itself.


Praise For Hell-Bent: Obsession, Pain, and the Search for Something Like Transcendence in Competitive Yoga…

“Hell-Bent is witty and wise. If you don't practice yoga, read it anyway – you may learn something about the impulse for self-transcendence. And if you do practice yoga, you will laugh and cry with recognition.” —Stefanie, Syman, New York Times Book Review

“In all honesty, Hell-Bent may be the best book I've read all year… Imagine if you can the lovechild of a sober Hunter S. Thompson and Elizabeth Gilbert and you'll get an idea of the prose.” —Kayt Sukel, The Big Think

“This extraordinarily thoughtful book stretches and reaches and bends in several seemingly impossible directions at the same time. It is at once a searching act of self-examination, a fascinating scientific investigation, a brave spiritual endeavor, and a fair minded look at one of yoga's most controversial icons. All in all, reading Hell-Bent makes for a wonderful, inspiring, maddening, complicated, edifying journey – and one that I was very happy to take.” —Elizabeth Gilbert, New York Times bestselling author of Eat, Pray, Love

“Who knew self-purification could be suspenseful? This tale of an unlikely America yogi and this maniacal outlandish guru is more than memoir. It's a spiritual thriller.” —Walter Kirn, New York Times Bestselling author of Up In the Air

“You'll be inspired to strip down to your intimates for hot yoga after devouring this read.” —Marie Claire

BENJAMIN LORR graduated from Columbia University with a degree in environmental biology and creative writing. He lives in New York City and is the author of Hell-Bent: Obsession, Pain, and the Search for Something Like Transcendence in Competitive Yoga.
Loading...
or support indie stores by buying on