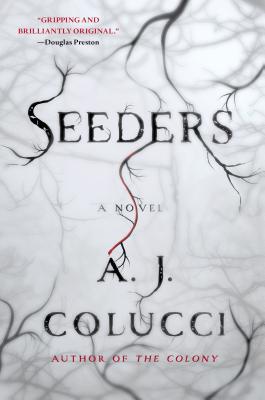 George Brookes is a brilliant but reclusive plant biologist living on a remote Canadian island. After his mysterious death, the heirs to his estate arrive on the island, including his daughter Isabelle, her teenage children, and Jules Beecher, a friend and pioneer in plant neurobiology. They will be isolated on the frigid island for two weeks, until the next supply boat arrives.

As Jules begins investigating the laboratory and scientific papers left by George, he comes to realize that his mentor may have achieved a monumental scientific breakthrough: communication between plants and humans. Within days, the island begins to have strange and violent effects on the group, especially Jules who becomes obsessed with George's journal, the strange fungus growing on every plant and tree, and horrible secrets that lay buried in the woods. It doesn't take long for Isabelle to realize that her father may have unleashed something sinister on the island, a malignant force that's far more deadly than any human. As a fierce storm hits and the power goes out, she knows they'll be lucky to make it out alive.

A.J. Colucci masterfully weaves real science with horror to create a truly terrifying thriller, drawing from astonishing new discoveries about plants and exploring their eerie implications. Seeders is a feast of horror and suspense.


Praise For Seeders: A Novel…

“Colucci's… prose is brisk and crisp…Seeders is a lean, straightforward book…[a fable] meant to warn us of the dangers of ecological abuse and exploitation, not to mention how human supremacy may be our ultimate downfall. It's a sound message, and even a profound one.” —NPR

“Colucci, author of The Colony (about killer ants), has served up another science-based thriller that will make you wonder what your Caesar salad is thinking about you as you eat it. This fun, scary, and intriguing book will be gleefully embraced by anyone who enjoys 'experiments gone terribly wrong' stories. Young adults and adults will find this yarn captivating as well as thought provoking.” —Library Journal (starred review)

“Gripping and brilliantly original. This is truly a bravura performance, as good as Crichton, with vivid characters, crisp writing, and exquisitely creepy science. The excitement stays at a high pitch from the opening chapter right up to the ghastly end. A page-turner extraordinaire.” —Douglas Preston, #1 New York Times bestselling author of The Kraken Project

“Move over King, Koontz, and Crichton, there's a new gunslinger in town named A.J. Colucci. Eerie, atmospheric, and strangely plausible, Colucci's Seeders is a creepy revelation–a riveting techno-thriller that reads like a Victorian ghost story. Seeders is a perfect chiller for the age of global warming. Highly recommended!” —Jay Bonansinga, New York Times bestselling co-author of The Walking Dead: The Fall of the Governor

“If you could mix H.G. Wells' Island of Dr. Moreau with a dash of Michael Crichton you'd have A. J. Colucci's Seeders, a taut suspense thriller that isolates its characters in the habitat of a mutation, putting a fascinating twist on what we know about evolution.” —Steve Alten, New York Times bestselling author of The Omega Project

A.J. Colucci worked for fifteen years as a newspaper reporter, magazine editor, and writer for corporate America. She is a member of International Thriller Writers. She lives in New Jersey. The Colony is her first novel.
Loading...
or
Not Currently Available for Direct Purchase