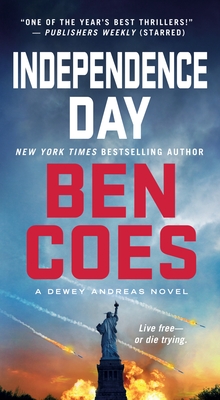 “Coes blows the competition away”—Brad Thor
Cloud, the code name a high-level Russian hacker, has acquired a nuclear weapon. It’s an older bomb from the USSR’s Cold War arsenal with the power to devastate a major city. Fueled by a dark and personal vendetta, Cloud has put it onto an anonymous trawler, piloted by jihadists, headed straight to America.
“Explosive from beginning to end.”—Bookreporter
Dewey Andreas, a former Delta working as an agent for the CIA, is still grieving the murder of his fiancée. He’s lost his focus, his edge—and the confidence of his superiors. But when an overseas mission to capture Cloud goes awry, Dewey becomes America’s last hope of putting a stop to the bomb. Now it’s up to Dewey to put his past behind him and risk everything to find one of the world’s most elusive enemies…or witness a terrorist attack timed to coincide with the country’s biggest holiday: Independence Day.
“Coes is in the same league as Brad Thor and Vince Flynn, and this high-octane race against time will have plot-driven thriller readers unable to turn the pages fast enough.”
—Booklist (starred review)

“My favorite novel in at least a decade. The writing was inherently masculine, brilliantly crafted.” —Huffington Post

“Another winner from a writer who is a rising star among the ranks of the literary world's most successful authors of the international thriller.” —The Nashua Telegraph

“Ben Coes has created a hero who ranks with the protagonists in a Vince Flynn or Brad Thor thriller . . . The Last Refuge is a winner and will keep readers turning the pages.” —The Associated Press

“Envision Clancy, Forsyth, and le Carre all writing in their prime . . . then kick in the boosters.” —Brad Thor