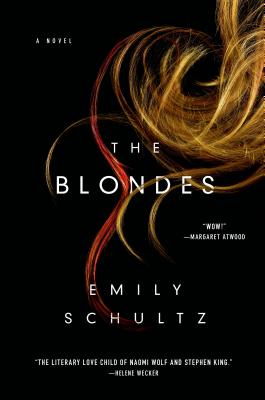 The Blondes is a hilarious and whipsmart novel where an epidemic of a rabies-like disease is carried only by blonde women, all of whom must go to great lengths to conceal their blondness.

Hazel Hayes is a grad student living in New York City. As the novel opens, she learns she is pregnant (from an affair with her married professor) at an apocalyptically bad time: random but deadly attacks on passers-by, all by blonde women, are terrorizing New Yorkers. Soon it becomes clear that the attacks are symptoms of a strange illness that is transforming blondes—whether CEOs, flight attendants, students or accountants—into rabid killers.

Emily Schultz's beautifully realized novel is a mix of satire, thriller, and serious literary work. With biting satiric wit, The Blondes is at once an examination of the complex relationships between women, and a merciless but giddily enjoyable portrait of what happens in a world where beauty is—literally—deadly.


Praise For The Blondes: A Novel…

“LIKE THE LITERARY LOVE CHILD OF NAOMI WOLF AND STEPHEN KING, The Blondes examines our cultural attitudes about beauty through the lens of a post-9/11, high-alert nightmare. The result is a SPELLBINDING brew, both satirical and deeply satisfying.” —Helene Wecker, author of The Golem and the Jinni

“Sharp and fluid and legitimately disturbing. A THINKING PERSON'S NAILBITER.” —Ben Lorry, author of Stories for Nighttime and Some for the Day

“The Blondes is intelligent, MESMERIZING, and fearless. An entirely original and beautifully twisted satire with a heart of darkness.” —Emily St. John Mandel, author of The Lola Quartet

“An energetic, startling novel. Emily Schultz is a writer with a deadly sense of humor. YOU LAUGH ONE MOMENT, YOU'RE FRIGHTENED THE NEXT. As unsettling as it is funny, The Blondes had me hooked from an early line: The neighbors have finished burning the hair... How could anybody not read on from there?” —Peter Orner, author of Last Car Over the Sagamore Bridge

“The Blondes takes you by surprise and keeps on surprising.” —Andrew Pyper, author of The Demonologist

“A nail-biter that is equal parts suspense, science fiction, and a funny, dark sendup of the stranglehold of gender.” —Kirkus (Starred)

“Fast-paced drama, punctuated with humor...Schultz writes a subtle commentary on how discrimination operates around the globe.” —Self Awareness

“Schultz spins an eerie tale with perspective into our cultural attitudes about beauty.” —Entertainment Weekly

“What started out as a pseudo zombie-tale is now also a road story, and a feminist bildungsroman, and a parable about prejudice and reproductive freedom and immigration” —The Los Angeles Times

EMILY SCHULTZ is the co-founder of the literary journal Joyland. Her novel, Heaven Is Small was named a finalist for the Trillium Book Award alongside books by Margaret Atwood and Alice Munro, as was The Blondes. She lives in Brooklyn with her husband Brian Joseph Davis.