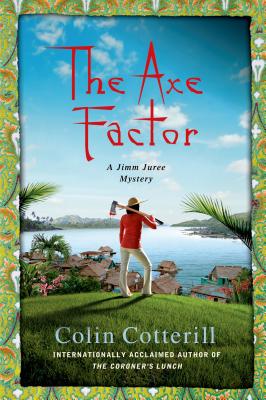 Since Jimm Juree moved, under duress, with her family to a rural village on the coast of Southern Thailand, she misses the bright lights of Chiang Mai. Most of all, she's missed her career as a journalist, which was just getting started. In Chiang Mai, she was covering substantial stories and major crimes. But here in Maprao, Jimm has to scrape assignments from the local online journal, the Chumphon Gazette and be happy about it when she gets one. This time they are sending her out to interview a local "farang" (European) writer, a man in his late fifties, originally from England, who writes award-winning crime novels, one Conrad Coralbank.

At the same time, several local women have left town without a word to anyone, leaving their possessions behind. These include the local doctor, Dr. Sumlak, who never returned from a conference, and the Thai wife of that "farang" writer, the aforementioned Conrad Coralbank. All of which looks a little suspicious, especially to Jimm's grandfather, an ex-cop, who notices Coralbank's interest in Jimm with a very jaundiced eye. With a major storm headed their way and a potential serial killer on the loose, it looks like Jimm Juree, her eccentric family, and the whole town of Maprao is in for some major changes.

"The Axe Factor" is a Jimm Juree mystery from Colin Cotterill.

Born in London, COLIN COTTERILL has worked as a teacher in Israel, Australia, the U.S., and Japan before he started training teachers in Thailand. Cotterill now lives in a small fishing village on the Gulf of Siam in Southern Thailand. He's won the Dilys and a CWA Dagger, and has been a finalist for several other awards. His Jimm Juree Mysteries include Killed at the Whim of a Hat, Grandad, There's a Head on the Beach, and The Axe Factor.
or
Not Currently Available for Direct Purchase