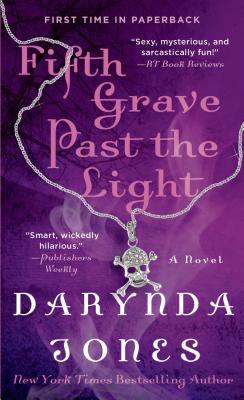 on a double espresso with a mocha latte chaser high.


Charley Davidson isn't your everyday, run-of-the-mill grim reaper. She's more of a paranormal private eye/grim reaper extraordinaire. However, she gets sidetracked when the sexy, sultry son of Satan, Reyes Farrow, moves in next door. To further complicate matters, Reyes is her main suspect in an arson case. Charley has vowed to stay away from him until she can find out the truth…but then dead women start appearing in her apartment, one after another, each lost, confused, and terrified beyond reason. When it becomes apparent that her own sister, Gemma, is the serial killer's next target Charley has no choice but to ask for Reyes' help. Arsonist or not, he's the one man alive who could protect Gemma no matter who or what came at her. But he wants something in return. Charley. All of her, body and soul. And to keep her sister safe, it is a price she is willing to pay.

“The fourth entry in Darynda Jones's wildly popular Charley Davidson series is every bit as solidly successful as the first. In fact, this might be the best yet. Fourth Grave Beneath My Feet continues to blend paranormal, romance, and mystery better than any other contemporary work out there...At its heart, Charley is still perfectly Charley, well-adjusted PI/grim reaper, and one of the elements that works so well is that right strike of outrageous humor one moment and teeth-chattering suspense the next.” —Heroes and Heartbreakers on Fourth Grave Beneath My Feet

“A great book…snappy writing and quirky dialogue…one of my favorites.” —Fiction Vixen on Fourth Grave Beneath My Feet

“Charley Davidson is one of the most fun characters I have had the privilege to read. She is witty, independent, and lives a little on the crazy side of life.” —Dark Faerie Tales on Third Grave Dead Ahead

“A hilarious, wickedly sexy, action packed, mystery that will have you howling with laughter… A strong character driven series, this urban fantasy takes you on a crazy laugh filled adventure with strong emotional story lines, multiple subplots, charismatic characters, and witty dialogue.” —Smexy Books on Third Grave Dead Ahead

“A barrel of laughs mixed with some intense action. Jones' trademark humor makes this series a must read for urban fantasy readers who like a good laugh with their suspense. Jones gives readers some of the most entertaining characters to come along in a long while.” —Debbie's Book Bag on Third Grave Dead Ahead

“Hilarious engrossing paranormal mysteries with absolutely no vampires or werewolves...with an easy-to-root-for heroine.” —Quirky Girls Read (A+) on Third Grave Dead Ahead

“Jones perfectly balances humor and suspense in [this] paranormal thriller featuring grim reaper, PI, and ‘all-around badass' Charley Davidson…It's the distinctive characters, dead and alive, and the almost constant laughs that will leave readers eager for the next installment.” —Publishers Weekly (starred review) on Second Grave on the Left

“This is an amazing book and a fantastic series! In a lot of ways it is similar to Janet Evanovich's Stephanie Plum series only ten times better!” —Night Owl Reviews on Second Grave on the Left

“A saucy sequel…Readers will be captivated by Charley's near-death adventures.” —The Associated Press on Second Grave on the Left

“Four and a half stars. Snarky, sassy Charley is back and taking no guff in Jones's action-packed new offering…There is murder and mystery aplenty…fun.” —RT Book Reviews on Second Grave on the Left

“Sexy, sassy . . . Jones's characters, both living and dead, are colorful and endearing. . . . Cheeky charm . . . sarcastic wit.” —The Associated Press on First Grave on the Right

“Jones skillfully establishes the novel's setting and keeps up the pace with plenty of action. And let's be honest--the sex is pretty hot, too. Fans of Sherrilyn Kenyon and other authors of paranormal romance will love this series debut.” —Library Journal (starred review) on First Grave on the Right

“Fast-talking Charley's wicked exuberance and lust for life will appeal to fans of MaryJanice Davidson and Janet Evanovich and maybe fill a hole for those mourning the recently canceled Ghost Whisperer.” —Publishers Weekly on First Grave on the Right

“It's a fun, sexy, exciting read.” —Suspense Magazine on First Grave on the Right

“Hold on to your hats and get comfortable, you won't want to get up for a long, long time as Charley Davidson sweeps you in and holds on tight.” —The Romance Reviews on First Grave on the Right

“A smashing, award-winning debut novel.” —Goodreads on First Grave on the Right

“A fast and fun read [that] will leave you begging for more.” —Fresh Fiction on First Grave on the Right

“This book takes a humorous view on the old Grim Reaper cliché. Charley is a smart, enjoyable character with enough snark to keep one laughing even as the plot darkens.” —Affaire de Coeur on First Grave on the Right

“The best debut novel I've read in years! Hilarious and heartfelt, sexy and surprising . . . I'm begging for the next one!!” —J. R. Ward, New York Times bestselling author of Lover Avenged, on First Grave on the Right

“I am furiously envious of Darynda Jones and rue the day she came up with this concept, damn her eyes. First Grave on the Right . . . kidnapped me from the first paragraph, and didn't let go until the exceedingly yummy conclusion.” —MaryJanice Davidson, New York Times bestselling author of Undead and Unwelcome and Me, Myself and Why? on First Grave on the Right

“First Grave on the Right is a phenomenal debut! This series opener has it all--rollicking humor, sizzling sexual tension, and a spine-tingling mystery. I'm eagerly awaiting the next Charley Davidson tale!” —Kresley Cole, New York Times bestselling author of Pleasure of a Dark Prince, on First Grave on the Right