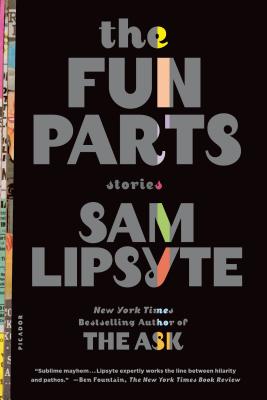 A boy eats his way to self-discovery, while another must battle the reality-brandishing monster preying on his fantasy realm. Elsewhere, an aerobics instructor—the daughter of a Holocaust survivor—makes the most shocking leap imaginable to save her soul. These are just a few of the characters you'll encounter in Sam Lipsyte's richly imagined world.

Featuring a grizzled and possibly deranged male doula, a doomsday hustler who must face the multi-universal truth of "the real-ass jumbo," and a tawdry glimpse of a high school shot-putting circuit in northern New Jersey, circa 1986, Lipsyte's short stories combine the tragicomic brilliance of his beloved novels with the compressed vitality of Venus Drive. The Fun Parts is Lipsyte at his very best—a far-ranging exploration of new voices and vistas from "the most consistently funny fiction writer working today" (Time).


Praise For The Fun Parts: Stories…

“[Fuses] angst and slapstick in a way unseen since Nathanael West walked the earth. Lipsyte's like a darker, funnier George Saunders, but not without that same core of warmth or kindness.” —Esquire

“Lipsyte is a brilliant wordsmith, and evidence of his skill is plentiful in this book, even more, arguably, than in his earlier works....Exquisite.” —San Francisco Chronicle

“Lipsyte's sentences are exhilarating in the way only truly desperate things can be, a perfect soundtrack to our exhausted, entropic times.” —The Boston Globe

“Lipsyte has cultivated a sensitivity to the ways that economic swings and social uncertainty make desperados of us all....Downright transformative. Modern scribes of satire: Meet your Bucky Schmidt.” —Slate

“In this second story collection, fierce satire mingles with warmth and pathos as Lipsyte (The Ask) showcases his knack for stylistic variety and tangles with the thorny human experiences of moving beyond one's past or shedding one's personal baggage...Lipsyte's biting humor suffuses the collection, but it's his ability to control the relative darkness of each moment that makes the stories so engrossing.” —Publishers' Weekly (starred review)

Sam Lipsyte was born in 1968. He is the author of the story collections Venus Drive (named one of the top twenty-five books of its year by the Voice Literary Supplement) and The Fun Parts and three novels: The Ask, The Subject Steve and Home Land, which was a New York Times Notable Book and received the first annual Believer Book Award. He is also the recipient of a Guggenheim fellowship. He lives in New York City and teaches at Columbia University.
Loading...
or
Not Currently Available for Direct Purchase