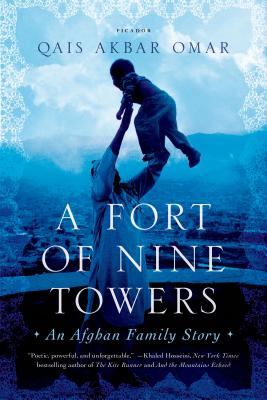 A Fort of Nine Towers

Twenty-three years ago—after the Soviets left and before the Taliban came to power—Kabul was a garden where seven-year-old Qais Akbar Omar flew kites from the roof of his grandfather's house. Then came the hollow sounds of rocket fire as the Mujahedin, self-proclaimed holy warriors, took over Afghanistan, and the country erupted in civil war. Omar's family fled, leaving everything behind to take shelter in an old fort. But after a narrow escape from death, his father decided that the family must leave the country.

Yet the journey proved more difficult than anticipated, and in this stunning coming-of-age memoir, Omar offers a moving recollection of these events—a story of daily hardships, relieved by moments of joy and immense beauty. Inflected with folktales and steeped in poetry, A Fort of Nine Towers is a life-affirming triumph.


Praise For A Fort of Nine Towers: An Afghan Family Story…

“Poetic, powerful, and unforgettable.” —Khaled Hosseini, New York Times bestselling author of The Kite Runner and And the Mountains Echoed

“Mind-boggling yet matter-of-fact...A riveting story of war as seen through a child's eyes and summoned from an adult's memory.” —The New York Times Book Review

“A Fort of Nine Towers captures a time and a place unknown to most Americans….Exceptional.” —The Boston Globe

“An extraordinary memoir...Even more haunting than The Kite Runner.” —The Philadelphia Inquirer

“Beautifully written, with the pacing and suspense of a novel...[A Fort of Nine Towers] is deeply fulfilling, remarkable not least because Omar lived to tell the tale.” —The Washington Post

“A classic autobiography of universal resonance...Tender and hopeful against all odds.” —Newsweek

“From squatting inside a cave in the head of a Bamyan Buddha to escaping torture at the teeth of a dog and his master, Qais Akbar Omar's tale of one family's journey during the Afghan civil war is inscriptional: its images carve themselves into the reader's mind. Unlike most accounts of life in exile, A Fort of Nine Towers never leaves Afghanistan, as a boy and his family remain trapped within the nation's borders by familial ties and by war. This book is essential reading for anyone eager to learn what more than three decades of war have cost the Afghan people.” —Eliza Griswold, author of the New York Times bestseller The Tenth Parallel: Dispatches from the Fault Line Between Christianity and Islam

“At a time when Afghanistan threatens to recede into a bloody and debased footnote, Qais Akbar Omar reminds us of the honor and courage of his people. A remarkable feat of memory and imagination.” —Joydeep Roy-Bhattacharya, author of The Watch and The Storyteller of Marrakesh

“In this stark, unflinching memoir, Qais Akbar Omar illuminates the beauty and tragedy of a country pushed to the brink by war. A Fort of Nine Towers gives voice to the unbreakable spirit of the Afghan people.” —G. Willow Wilson, author of Alif the Unseen

“As lyrical as it is haunting, this mesmerizing, not-to-be-missed debut memoir is also a loving evocation of a misunderstood land and people....A gorgeously rich tapestry of an amazing life and culture.” —Kirkus, Starred Review

“Omar's prose is deliciously forthright, extravagant, and somewhere mischievous, and very Afghan in its sense of long-suffering endurance and also reconciliation.” —Publishers Weekly

“I know of no other book in which the complex realities of life--and death--in contemporary Afghanistan are so starkly and intimately portrayed. This brave memoir, rich in tough humor and insight, recounts an insider's view into both the suffering and the integrity of an uncompromisingly proud and courageous people. Above all, it is a powerful reminder of the extraordinary tenacity of a culture that foreigners have repeatedly and fatally misjudged.” —Jason Elliot, author of An Unexpected Light: Travels in Afghanistan

“This is a book for those who love Afghanistan, for those who want to understand it, or simply for those who value deeply the best in the human spirit. It is a tale that deserves to rank with The Kite Runner.” —Ronal d E. Neumann, former U.S. ambassador to Afghanistan and president of the American Academy of Diplomacy

“If you read only one book this summer, make it this one....Astonishing.” —Jeanette Winterson, O, The Oprah Magazine

Qais Akbar Omar (whose first name is pronounced “Kice”) manages his family’s carpet business in Kabul and writes books. In 2007, he was a visiting scholar at the University of Colorado. He has studied business at Brandeis University and is currently pursuing an MFA in creative writing at Boston University. Omar has lectured on Afghan carpets in Afghanistan, Europe, and the United States. He is the coauthor, with Stephen Landrigan, of Shakespeare in Kabul.