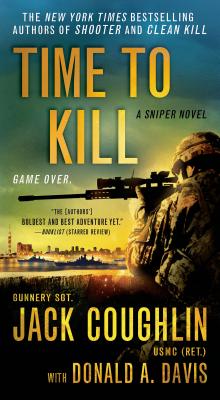 An American accountant is murdered in his Maryland home by Iranian assassins. A goodwill visit to Cairo by Iran's national soccer team ends in a bloodbath. Egyptian missiles rain down on an Iranian Navy ship in the Red Sea-and Iran retaliates by landing elite troops at a popular Egyptian resort and attacking tourist hotels. The Muslim Brotherhood is on the march to bring Egypt under the political control of powerful Iran.

Running the coup is a ruthless double agent called the Pharaoh, who will stop at nothing to establish an obedient puppet regime on Israel's border, and take complete control of the Suez Canal, the choke point for the world's oil flow. The United States will never allow that to happen, but options are limited and things are moving fast. Washington turns to the one man who can restore balance in the region: Marine master sniper Kyle Swanson.

Enlisting the help of a British Secret Service agent, the beautiful Egyptologist Tianha Bialy, Swanson goes on a perilous mission to prevent a total war in the Middle East-no matter what the cost...

"This [series] is a definite winner for all fans of the military action thriller." -Booklist

Time to Kill is the sixth Kyle Swanson Sniper Novel from Gunnery Sgt. Jack Coughlin and Donald A. Davis.

“Coughlin and Davis' series only gets better with each installment…Kyle Swanson returns for his boldest and best adventure yet.” —Booklist (starred review)

“A definite winner for all fans of the military action thriller.” —Booklist on RUNNING THE MAZE

“Former Marine sniper Coughlin stretches but does not strain credulity in this intricate story that aptly illustrates the maxim ‘no plan survives contact with the enemy.'” —Publishers Weekly on RUNNING THE MAZE

“The pages fly by as Swanson must face his most personal mission yet. The military tactics take a backseat to the characters, creating a strong and compelling narrative. Coughlin and Davis have concocted another winner that should only encourage a growing readership.” —Booklist

“The [plot] propels the pages forward, but this one isn't all about action: Swanson proves a surprisingly complex character...Dead Shot suggest[s] a hardware-heavy story that only an armed- services veteran could love. Surprisingly, it's completely the opposite. Readers will be compelled...and will look forward to another Swanson adventure.” —Booklist on DEAD SHOT

“Tight, suspenseful…Here's hoping this is the first of many Swanson novels.” —Booklist on KILL ZONE

“One of the best snipers in the Marine Corps, perhaps the very best. When I asked one of his commanders about his skills, the commander smiled and said, ‘I'm just glad he's on our side.'” —Peter Maass, war-correspondent and bestselling author of Love Thy Neighbor, on SHOOTER

“The combat narratives here recount battlefield action with considerable energy…A renowned sniper, Coughlin is less concerned with his tally than with the human values of comradeship and love.” —The Washington Post on SHOOTER

“Coughlin is a sniper, perhaps one of the most respected and feared in the Corps, and his memoir, Shooter, offers a uniquely intimate look into the life of one trained to live in the shadows . . . some of the most poignant action ever recorded in a modern Marine memoir.” —Seapower magazine on SHOOTER