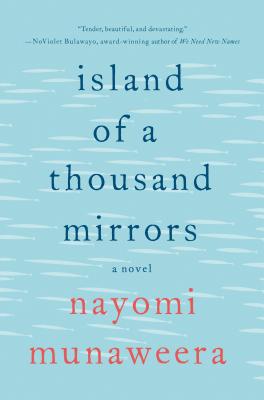 Before violence tore apart the tapestry of Sri Lanka and turned its pristine beaches red, there were two families. Yasodhara tells the story of her own Sinhala family, rich in love, with everything they could ask for. As a child in idyllic Colombo, Yasodhara's and her siblings' lives are shaped by social hierarchies, their parents' ambitions, teenage love and, subtly, the differences between Tamil and Sinhala people; but the peace is shattered by the tragedies of war. Yasodhara's family escapes to Los Angeles. But Yasodhara's life has already become intertwined with a young Tamil girl's…

Saraswathie is living in the active war zone of Sri Lanka, and hopes to become a teacher. But her dreams for the future are abruptly stamped out when she is arrested by a group of Sinhala soldiers and pulled into the very heart of the conflict that she has tried so hard to avoid – a conflict that, eventually, will connect her and Yasodhara in unexpected ways.

Nayomi Munaweera's Island of a Thousand Mirrors is an emotionally resonant saga of cultural heritage, heartbreaking conflict and deep family bonds. Narrated in two unforgettably authentic voices and spanning the entirety of the decades-long civil war, it offers an unparalleled portrait of a beautiful land during its most difficult moment by a spellbinding new literary talent who promises tremendous things to come.

“By turns tender, beautiful, and devastating, Island of A Thousand Mirrors is a deeply resonant tale of an unraveling Sri Lanka. Incredibly moving, complex, and with prose you may want to eat, this debut is a triumph.” —NoViolet Bulawayo, award-winning author of We Need New Names

“A searing tale of the Sri Lankan civil war...Nayomi Munaweera breathes life into the beauty and terror of that era through her delicate, bittersweet prose. An unforgettable novel.” —Yangsze Choo, author of The Ghost Bride, international bestseller in SE Asia and Oprah.com's Book of the Week

“A novel of the heart...The colour, tastes, sounds and smells of Sri Lanka ooze from its pages, vibrant and intoxicating, but as beauty turns to brutality our sympathies are tossed between two young women whose different paths are fashioned by the violence of civil war, but whose inner humanity is never forgotten.” —Sarah Dunant, author of Blood and Beauty and Birth of Venus

“Munaweera writes with ferocity, fire and poetry of the incomprehensible madness of civil war and its effects upon those caught within it... A masterful, incendiary debut.” —Janet Fitch, #1 international bestselling author of White Oleander

“The three women and the core of this ambitious, globe-spanning story show us, heartbreakingly, that we are linked by more than nation, more than race, more, even than blood. A dark, beautiful, transporting debut.” —V.V.Ganeshananathan, author of Love Marriage

NAYOMI MUNAWEERA was born in Sri Lanka and grew up in Nigeria. She emigrated to the United States in her early teens, and now lives in Oakland, CA. Island of a Thousand Mirrors won the 2013 Commonwealth Book Prize for the Asian Region and was longlisted for the 2012 Man Asian Literary Prize.