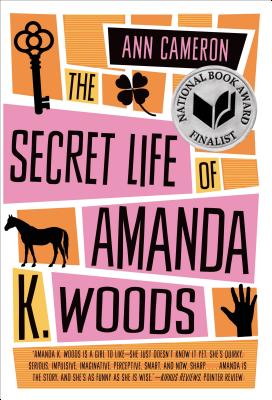 Amanda Woods is discovering that there are some things in life you just can't change, like who your parents are or how your older sister treats you, but she is determined to change what she can. To begin with, she's not going to be just plain Amanda Woods (the girl her mother seems to think is just average). She's going to be Amanda K. Woods-someone who is proud and strong and sure of herself, someone who can have a French pen pal and a best friend of her own choosing, someone who finds four-leaf clovers and can get perfect scores on her math homework. There is more to Amanda than anyone else can see, things about her that Amanda herself doesn't even know yet, but she's finding out. In The Secret Life of Amanda K. Woods, her first novel for older children, Ann Cameron presents a heroine who is philosophical and honest as only a twelve-year-old can be.

Praise For The Secret Life of Amanda K. Woods…

“Cameron paints a sensitive portrait of an 11-year-old loner in this story set in 1950s Wisconsin...[Amanda's] growing pains, gracefully conveyed though quiet, contemplative narrative, will hit home with many readers.” —Publishers Weekly

“Cameron displays a virtuoso gift for precision, telling observations, and creative but unforced imagery.” —Starred, Bulletin of the Center for Children's Books

“Amanda K. Woods is a girl to like--she just doesn't know it yet. She's quirky, serious, impulsive, imaginative, perceptive, smart, and now, sharp...Amanda is the story, and she's as funny as she is wise.” —Kirkus Reviews, pointer review

Ann Cameron was born in Rice Lake, Wisconsin, in 1943 in the middle of an October blizzard. She grew up on a farm on the outskirts of that small town, and from the time she could walk she loved exploring it -- picking wild violets, staring into the eyes of cows and horses and chickens, puzzling over where the sun went when it set and wanting to follow it. She says: "When I was a child I fell in love with nature, imagination, and freedom. Later my childhood friends and I made up our own games. We spent lots of time outside, skiing, hiking, biking, and fishing. Our world seemed to us almost separate from the world of adults. I think the independence my childhood friends and I enjoyed is disappearing from the life of American children today, and I want them to feel it through my books."
In third grade, Ann decided that when she grew up she wanted to be a writer."I loved to read," she says, "but I didn't know anyone who was an author. I wasn't sure I could be one. I was afraid I couldn't. Every story I wrote as a child had behind it that terrible, troubling question: was it the story of someone who could become an author? If I could advise children who want to be authors and who perhaps worry as I did, I'd tell them to read a lot, learn all they can about what makes stories beautiful, powerful, and exciting, and not worry about the future."

Ann graduated from Radcliffe College, where she studied with the poet Robert Lowell. He called one of her poems "magical" and encouraged her to keep writing. After graduating from college she worked in publishing in New York City, and studied at the University of Iowa Writers' Workshop, where she received an M.F.A. in English in 1972.

Her first book for children, The Seed, was published in 1974. The book was inspired by a seed growing on her windowsill: transformed into a story, it became a young seed in the ground afraid to grow because it had heard a terrible storm in the unknown world above it.

Ann's books about Julian Bates and his family found their beginning in stories told her by a South African friend, Julian DeWette. "I wanted to write stories that would include the emotions all children feel," Ann says. "Now that I've heard from children around the world who like my books, I'm delighted to find that I've really done it!"

In 1983, Ann visited Guatemala and decided to divide her time between New York City and Guatemala. "I'd always felt that if I lived in another culture I'd learn other ways of seeing things and become a broader person than if I knew only one culture's outlook. Now I have years of living among Guatemalan people, some of whom are living on or over the edge of poverty. This is not a good thing, and it's not right. Yet the difficulties of living in Guatemala often teach people to recognize the impermanence of life and to value each day and each other more than material things. I try to do that, too."

Ann now lives most of the year in Panajachel, Guatemala, the small town she calls San Pablo in her short novel The Most Beautiful Place in the World. She has worked to improve the Panajachel library so that Guatemalan children will have the same opportunity to read, learn, and dream that American children have. She is married to Bill Cherry, a former sailor, newspaper reporter, and editor, and retired staff director of a subcommittee of the U.S. House of Representatives. They live in view of three volcanoes, a beautiful lake, and a waterfall, in a small house with flowers growing over the roof and a lemon tree in the garden.