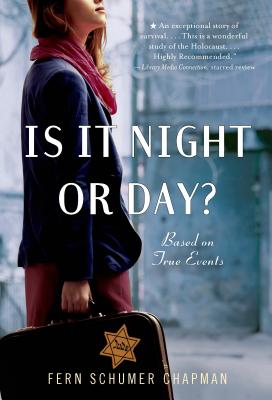 Is It Night or Day?

It's 1938, and twelve-year-old Edith is about to move from the tiny German village she's lived in all her life to a place that seems as foreign as the moon: Chicago, Illinois. And she will be doing it alone. This dramatic and chilling novel about one girl's escape from Hitler's Germany was inspired by the experiences of the author's mother, one of twelve hundred children rescued by Americans as part of the One Thousand Children project.

Is It Night or Day? is a 2011 Bank Street Best Children's Book of the Year.

“* This book is an exceptional story of survival and devotion to homeland. . . . This is a wonderful study of the Holocaust in a way that young readers will understand. Highly Recommended.” —Library Media Connection, starred review

“* In Edith's bewildered, sad, angry voice, the words are eloquent and powerful. . . . As with the best writing, the specifics about life as a young immigrant are universal. ” —Booklist, starred review

“Chapman captures a plucky determination in Edith that readers will find endearing. There is no Cinderella ending for Edith, but the hope she finds in Jewish ballplayer Hank Greenberg and the honesty in her story make this historical fiction well worth reading.” —Publishers Weekly

Fern Schumer Chapman is the author of Motherland: Beyond the Holocaust: A Daughter’s Journey to Reclaim the Past, which was a finalist for the National Jewish Book Award. She lives in northern Illinois.
Loading...
or support indie stores by buying on