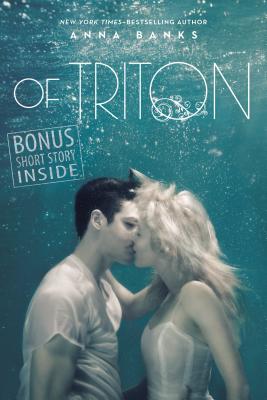 Of Triton (The Syrena Legacy #2)

Emma has just learned that her mother is a long-lost Poseidon princess, and now struggles with an identity crisis: As a Half-Breed, she's a freak in the human world and an abomination in the Syrena realm. Syrena law states all Half-Breeds should be put to death.

As if that's not bad enough, her mother's reappearance in the Syrena world turns the two kingdoms—Poseidon and Triton—against one another. Which leaves Emma with a decision to make: Should she comply with Galen's request to keep herself safe and just hope for the best? Or should she risk it all and reveal herself—and her Gift—to save a people she's never known?

Once again, Anna Banks infuses Emma and Galen's points of view with humor, intrigue, and waves of romance.


Praise For Of Triton (The Syrena Legacy #2)…

“A refreshing story filled with vibrant characters, feisty humor, and an irresistible romance. This story of star-crossed lovers in a luscious coastal setting brings new life to the age-old myth of merfolk and left me swooning for more!” —Marissa Meyer, New York Times–bestselling author of Cinder and Scarlet, on Of Poseidon

“Banks's first novel has . . . a great deal of charm.” —Publishers Weekly on Of Poseidon

“Another twist on the mermaid theme comes with a hefty dose of romance and a heavier dollop of comedy in this debut. . . . Entertaining for readers riding the wave of mermaid fantasies.” —Kirkus Reviews on Of Poseidon

Anna Banks grew up in a small town called Niceville (yes, really). She now lives in Crestview, Florida, with her husband and their daughter. She is the author of The Syrena Legacy series: Of Poseidon, Of Triton, and Of Neptune.
Loading...
or support indie stores by buying on
(This book is on backorder)