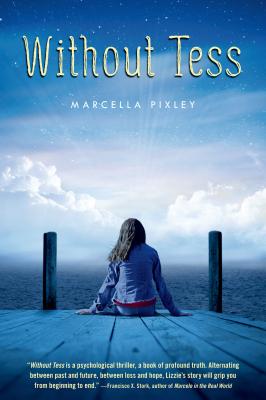 Tess and Lizzie are sisters, sisters as close as can be, who share a secret world filled with selkies, flying horses, and a girl who can transform into a wolf in the middle of the night. But when Lizzie is ready to grow up, Tess clings to their fantasies. As Tess sinks deeper and deeper into her delusions, she decides that she can't live in the real world any longer and leaves Lizzie and her family forever. Now, years later, Lizzie is in high school and struggling to understand what happened to her sister. With the help of a school psychologist and Tess's battered journal, Lizzie searches for a way to finally let Tess go.


Praise For Without Tess…

“Without Tess is a psychological thriller, a book of profound truth. Alternating between past and future, between loss and hope, Lizzie's story will grip you from beginning to end.” —Francisco Stork, author of Marcelo in the Real World

“Following up on themes raised in her well-received first novel, Freak, . . . Marcella Pixley continues to explore the complexities of sibling loyalty.” —The New York Times

“Pixley, who skillfully tackled another complicated sisterly relationship in Freak . . . takes a rather provocative step here: she sets up some alluring and imaginative magical conceits that will immediately catch the attention of fantasy readers just as they did Lizzie, and then mercilessly makes their appeal their danger.” —The Bulletin of the Center for Children's Books

“Pixley once again plumbs the emotional depths of a tough subject with sensitivity and insight into the complexities of human nature and sibling bonds.” —Kirkus Reviews

Marcella Pixley is a middle school language arts teacher and a writer. Her poetry has been published in various literary journals, and she has been nominated for a Pushcart Prize. Her first book, Freak, received four starred reviews and was named a Kirkus Best Book of the Year. She lives in Westford, Massachusetts, with her husband and two sons.
Loading...
or
Not Currently Available for Direct Purchase