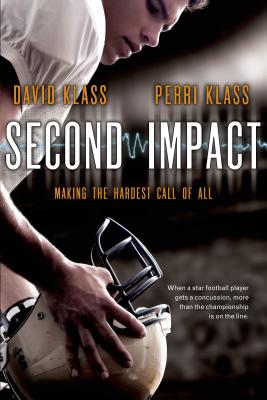 Making the Hardest Call of All

Kendall is football town, and Jerry Downing is the high school's star quarterback, working to redeem himself after he nearly killed a girl in a drunk driving accident last year. Carla Jenson, lead reporter for the school newspaper's sports section, has recruited Jerry to co-author a blog chronicling the season from each of their perspectives. When Jerry's best friend on the team takes a hit too hard and gets hurt, Carla wonders publicly if injury in the game comes at too high a cost in a player's life—but not everyone in Kendall wants to hear it. . . .

David Klass and Perri Klass's Second Impact is an action-packed story that will resonate with readers who have been following recent news stories about football injuries.


Praise For Second Impact: Making the Hardest Call of All…

“What is exceptional is the penetrating look at high-school football culture he provides via the school newspaper's sports blog. . . Klass and Klass still deliver a highly engaging, timely, and thought provoking read.” —Booklist

“The authors, an acclaimed writer for teens and a doctor well-known for her medical journalism, do a remarkable job incorporating both riveting sports action and sobering medical facts in the narrative. . . will resonate with aspiring journalists and teen sports fans alike.” —Kirkus Reviews

“Written by a YA veteran with his sister, a pediatrician and medical writer, the book is highly topical and rich with current research.” —School Library Journal

Perri Klass is a pediatrician and contributor to the New York Times as well as an author of several books for adults. She is also professor of journalism and pediatrics at New York University. Second Impact is her first book for teens. She lives in New York City.
Loading...
or support indie stores by buying on