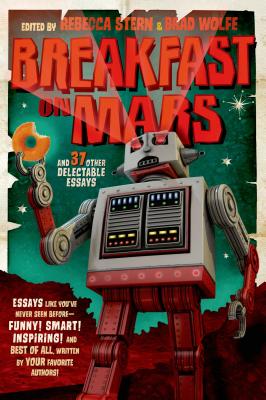 Breakfast on Mars and 37 Other Delectable Essays will inspire students to think differently about the much-feared assignment in elementary and middle schools around the country: essay writing.

Rebecca Stern's fifth-grade students were bored to death with essay writing, and the one thing Rebecca needed to inspire them—great examples appropriate for kids—was nowhere to be found. Inspired by a challenge, Rebecca joined forces with her friend, social entrepreneur Brad Wolfe, and the two came up with a terrific proposal—to gather together a collection of unconventional essays by some of the best writers around. They have compiled and edited a collection of imaginative, rule-breaking, and untraditional essays that is sure to change the way you think about the essay.

“* An important collection that ought to become a staple in writing classes.” —Kirkus Reviews, starred review

“* A refreshing and useful tool for every middle- and high-school writing teacher to keep handy.” —Publishers Weekly, starred review

“A unique volume, well worth the read.” —School Library Journal

Rebecca Stern was an elementary and middle school teacher for ten years and is now a freelance editor. She is the co-author of Breakfast on Mars and 37 Other Delectable Essays. She lives with her husband and their dog, Laika, on a hill in San Francisco.
Loading...
or support indie stores by buying on