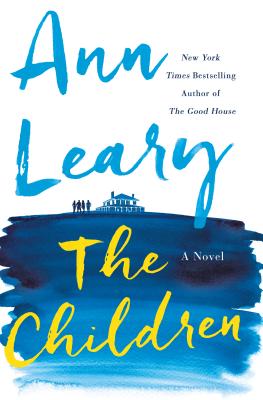 From New York Times bestselling author Ann Leary comes the captivating story of a wealthy, but unconventional New England family, told from the perspective of a reclusive 29-year-old who has a secret (and famous) life on the Internet.

Charlotte Maynard rarely leaves her mother’s home, the sprawling Connecticut lake house that belonged to her late stepfather, Whit Whitman, and the generations of Whitmans before him. While Charlotte and her sister, Sally, grew up at “Lakeside,” their stepbrothers, Spin and Perry, were welcomed as weekend guests. Now the grown boys own the estate, which Joan occupies by their grace—and a provision in the family trust. When Spin, the youngest and favorite of all the children, brings his fiancé home for the summer, the entire family is intrigued. The beautiful and accomplished Laurel Atwood breathes new life into this often comically rarefied world. But as the wedding draws near, and flaws surface in the family’s polite veneer, an array of simmering resentments and unfortunate truths is exposed.

With remarkable wit and insight, Ann Leary pulls back the curtain on one blended family, as they are forced to grapple with the assets and liabilities – both material and psychological – left behind by their wonderfully flawed patriarch.


Praise For The Children: A Novel…

“With a deft, sure touch, Ann Leary moves easily and confidently between comedy and pathos, painting a rich portrait of a wealthy, eccentric Connecticut family whose conflicts and loyalties are far more complex than they first appear. As the story unfolds, it becomes a profound meditation on the burden of expectations, familial ties that bind, and the explosive nature of buried secrets.” —Christina Baker Kline, author of Orphan Train

“I loved this crumbling lakeside home, the family cracked at its foundation, and the strange intruders chipping away at everyone's peace of mind. Ann Leary's compelling tale is satisfyingly layered with unreliable witnesses and betrayals large and small; in which the worst harm may not be caused by an unknown stranger.” —Helen Simonson, author of Major Pettigrew’s Last Stand

“In this deeply satisfying novel about how unknowable people can be, intrigue builds with glass shards of dark humor toward an ending that is far from comic.” —Kirkus, starred review

“The Children is populated by comically quirky characters reminiscent of Anne Tyler at her best. But in Ann Leary's capable hands, they come alive as funny, wise, sometimes confused but always hopeful as they navigate a plot rich with unexpected turns. Leary's unique voice and perspective make this the novel you won't be able to put down this summer.” —Ann Hood, author of The Obituary Writer

"[Leary's] characters are a delightful blend of strong personalities, all with their own little touch of delicious evil, and her darkly comic send-ups of New England wealth, nouveau riche, and Internet culture should keep readers absorbed until the final, most shocking secrets are revealed." —Publishers Weekly

"A read-in-one-sitting romp, Leary’s wry and searing satire of affluence and elitism comically yet steadily builds to a sobering and malevolent finale". —Booklist

"No one does the unreliable female narrator like Ann Leary...A cautionary fairy tale about what happens when you think you’re irrelevantly above it all.” —Lit Hub

"Leary has a gift for creating compelling, layered characters, and the structure and pacing of this novel are remarkable.” —Dallas-Fort Worth Star Telegram

“As in The Good House, the details in Leary’s characters are bright.” —The New York Times Book Review

"Leary commands every scene with the poise of a practiced storyteller who has mastered the timing required to craft narrative tension, punctuated throughout by precise and intentional reveals."—Ploughshares


Praise for The Good House

“Leary writes with humor and insight, revealing both the pure pleasure of drinking and the lies and justifications of alcoholism, the warmth Hildy feels toward others when she drinks and the desperation that makes her put alcohol before the people she loves. The result is a layered and complex portrait of a woman struggling with addiction, in a town where no secret stays secret for long.” – The New York Times Book Review

“Fresh, sharp and masterfully told. Hildy’s tale is as intoxicating as it is sobering.” ­—People (4 stars)

“Leary gleefully peels back the pretensions that so often accompany portraits of ye olde Americana, peering through the shingles to reveal a lobster pot’s worth of ensnared ties between townies and the newly entitled. . . . The Good House is a good read.” —USA Today

"Leary has a gift for creating compelling, layered characters, and the structure and pacing of this novel are remarkable." —The Fort Worth Star-Telegram

ANN LEARY is the author of the memoir An Innocent, A Broad and the novel Outtakes from a Marriage. She has written fiction and nonfiction for various magazines and literary publications. Ann competes in equestrian sports and is a volunteer EMT. She and her family share their small farm in Connecticut with four dogs, three horses, and an angry cat named Sneakers.
Loading...
or
Not Currently Available for Direct Purchase