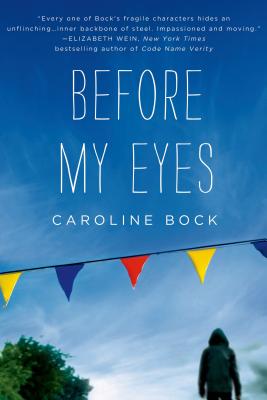 In Caroline Bock's Before My Eyes, Claire has spent the last few months taking care of her six-year-old sister, Izzy, as their mother lies in a hospital bed. Claire believes she has everything under control until she meets a guy online who appears to be a kindred spirit. Claire is initially flattered by the attention but when she meets Max, the shy state senator's son, her feelings become complicated. Working alongside Max at a beachfront food stand is Barkley. Lonely and obsessive, Barkley has been hearing a voice in his head.

Narrated in turns by Claire, Max, and Barkley, Before My Eyes captures a moment when possibilities should be opening up, but instead everything teeters on the brink of destruction.


Praise For Before My Eyes…

CAROLINE BOCK is the author of the critically-acclaimed young adult novel LIE.  She  currently lives in Maryland with her husband and two children.
or
Not Currently Available for Direct Purchase